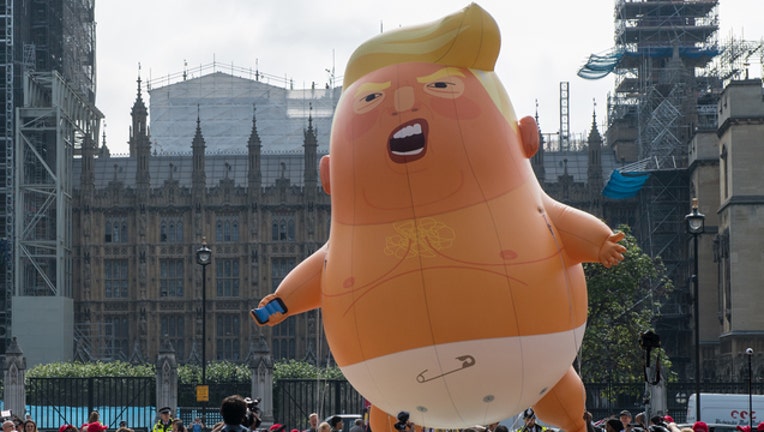 A 6-meter high effigy of Donald Trump, dubbed the 'Trump Baby', is raised in Parliament Square in protest of the U.S. President's visit to the United Kingdom on July 13, 2018 in London, United Kingdom. (Photo by Chris J Ratcliffe/Getty Images)

WASHINGTON (FOX 5 DC) - A group of protesters has requested to fly the famous “Baby Trump Blimp” on the National Mall on the Fourth of July.

FOX 5 has acquired the request submitted to the National Park Service seeking permission to fly the balloon on July 4th.

The request was filed by Tighe Barry of Northeast DC on Monday, according to the document.

Demonstrators have requested to occupy “any open grassy area nearest to Lincoln Memorial” between 7 a.m. and 1 p.m. on the Fourth of July.

Protesters said their purpose was “to show opposition to a political event called by (the) president on July 4th."

The blimp has become popular at protests in England when President Donald Trump makes official visits to the country.

D.C Mayor Muriel Bowser’s office confirmed last week that they’ve been told Trump will give a speech at the Lincoln Memorial on July 4th. In a tweet several months ago, Trump said he was planning an event called “A Salute To America,” featuring “an address by your favorite President, me!”

The National Park Service, like the mayor’s office, said the agency doesn’t have all the details on what the White House is planning but said the “Salute to America” events should coincide and not change regularly scheduled annual events.

RELATED: Tips to keep your pet safe during Fourth of July fireworks

“We continue to work with the White House on creating a Salute to America program that will bring Americans from all over the country together in celebration of our nation,” NPS spokesman Mike Litterst said. “While the details of that program have not yet been announced by the White House, we do not anticipate conflicts or overlap with any of the day’s other scheduled events, including the National Independence Day Parade, A Capitol Fourth, or the fireworks show.”

Litterst said there will be some minor changes to the fireworks show with the launch location moving approximately 1,500 feet, from the Lincoln Memorial Reflecting Pool to West Potomac Park (between the Lincoln Memorial and the FDR Memorial). The show will also be lengthened from 17-and-a-half minutes to 20 minutes.