PORTLAND, Ore. (AP) - Leaders in Portland, Oregon, caught their breath and moved forward with cautious optimism Friday after the first nightly protest in weeks ended without any major confrontations, violence or arrests.

The dramatic change in tone outside a federal courthouse that's become ground zero in clashes between demonstrators and federal agents came after the U.S. government began drawing down its forces in the liberal city under a deal between Democratic Gov. Kate Brown and the Trump administration.

RELATED: US agents in Portland set to pull back, but tensions simmer

As agents from U.S. Customs and Border Protection, the U.S. Marshals Service and Immigration and Customs Enforcement pulled back, troopers with the Oregon State Police took over. There were no visible signs of any law enforcement presence outside the Mark O. Hatfield Federal Courthouse, where a protest lasted into early Friday.

Mayor Ted Wheeler also struck an optimistic tone but cautioned that there was much work to be done after more than 60 days of protests — and not just in cleaning up downtown Portland.

Leaders in Oregon are pushing for a raft of measures that would address systemic racism in everything from policing to housing. Those proposals could be fast-tracked for consideration in a special legislative session later this summer.

The governor also announced the creation of a Racial Justice Council to advise her on criminal justice reform and police accountability, health equity, economic opportunity, housing and homelessness, and environmental justice.

“The council will examine and begin to dismantle the racist policies that have created grave disparities in virtually every part of our society,” Brown’s office said in a statement.

A majority of the group's members will be people of color and include state lawmakers to help get policies passed next year.

Portland's City Council also voted this week to refer a ballot measure to voters in November that would create a police review board independent from any elected official or city department. 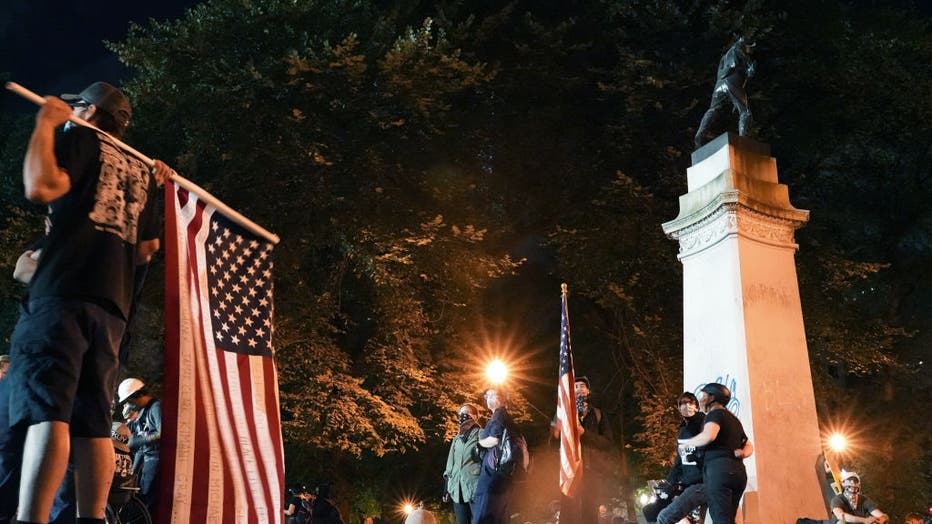 Protesters walk through Lownsdale Square during a rally against racial injustice and police brutality in front of the Mark O. Hatfield U.S. Courthouse on July 30, 2020 in Portland, Oregon. (Photo by Nathan Howard/Getty Images)

The scene outside the federal courthouse stood in sharp contrast to the violent clashes between protesters and the agents that President Donald Trump sent to Oregon's largest city in early July. Protests have roiled Portland for more than two months following the police killing of George Floyd in Minneapolis.

And while thousands have marched and rallied peacefully, Portland's federal courthouse became a target for some protesters. Smaller numbers of demonstrators tried to tear down a fence erected to protect it, lit fires at the courthouse entryway and hurled fireworks, flares and bricks at the agents holed up inside. Most nights, the agents responded by firing tear gas.

But at the protest that began Thursday night, there was little violence and few signs of confrontation as several thousand people gathered near the courthouse .

A handful of protesters pointed lights and lasers at the building, but state troopers remained inside and did not respond. Soon afterward, hundreds of demonstrators gathered about a block from the courthouse to listen to speeches, with little sign of a law enforcement presence. The mood remained calm into early Friday as the crowd dwindled to about 500 demonstrators.

In preparation for the handover from federal authorities to state troopers, the local sheriff and Portland police met and agreed not to use tear gas except in situations with a threat of serious injury or death, the mayor said.

Wheeler, who was gassed when he joined protesters outside the courthouse last week, added that tear gas “as a tactic really isn’t all that effective” because protesters have donned gas masks and often return to the action after recovering for a few minutes. He apologized to peaceful demonstrators exposed to tear gas used by Portland police before federal officials arrived.

Under the deal announced by the governor, the agents will withdraw in phases. But federal officials insisted that the agents will not leave the city completely and will be kept on standby.

Portland Police Chief Chuck Lovell said he believes the new collaboration between local law enforcement agencies will be seen “as a victory in many ways.”

RELATED: 'I don’t judge one crowd vs. another': Fauci clashes with GOP lawmaker over protests during coronavirus

“A lot of people came out to express their displeasure of folks from the federal government here and engaging in crowd control with members of our community,” Lovell said. “So I’m hoping that on many levels that people are happy in this development.”

The U.S. government had arrested 94 people as of Wednesday, the most recent accounting. Since the protests began, Lovell said local police made more than 400 arrests.