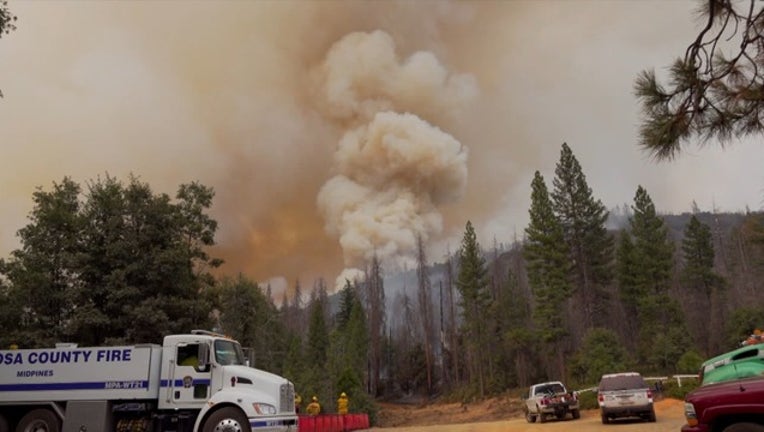 Yosemite Valley and other sections of Yosemite National Park are closed indefinitely because of the Ferguson Fire. Aug. 5, 2018

OAKLAND, Calif. (KTVU) - A new report found that the country’s 417 national parks, including the nine in California, are “plagued” by significant air pollution problems.

A total of 85 percent of the parks have air that is unhealthy to breathe at times and nearly 90 percent suffer from haze pollution, according to the “Polluted Parks” report released by the National Parks Conservation Association.

"The poor air quality in our national parks is both disturbing and unacceptable," said Theresa Pierno, president and CEO of the conservation association. "Nearly every single one of our more than 400 national parks is plagued by air pollution. If we don't take immediate action to combat this, the results will be devastating and irreversible."

Climate change, the report authors found, is the biggest reason for this troubling trend.

And then there are some other specific factors that affect individual parks.

For example, last summer, Yosemite National Park experienced heavy air pollution due to smoke from the Ferguson Fire, although it is unclear whether the wildfire smoke was the main reason the park received scores of "significant" concern in the report.

Kristine Roselius, a spokeswoman for the Bay Area Air Quality Management District, added that with regards to Yosemite, the park is impacted in the warmer months by ozone from traffic in the Central Valley and local traffic is also a contributor.

While most air pollution doesn’t originate in national parks, the authors wrote, it can travel hundreds of miles from its source, thereby affecting all parks—even remote ones—and distant communities. Much of this pollution begins with extracting fossil fuels, including oil, gas and coal, and burning them in power plants and vehicles, according to the report. Additionally, industrial-scale agricultural operations harm the air, like in California’s Central Valley communities as well as in Sequoia and Kings Canyon National Parks and César E. Chávez National Monument.

There are solutions, the report authors said. They include putting an end to pollution and transitioning to clean energy – a move that will need the consent of individuals, businesses and lawmakers from City Hall to Congress.