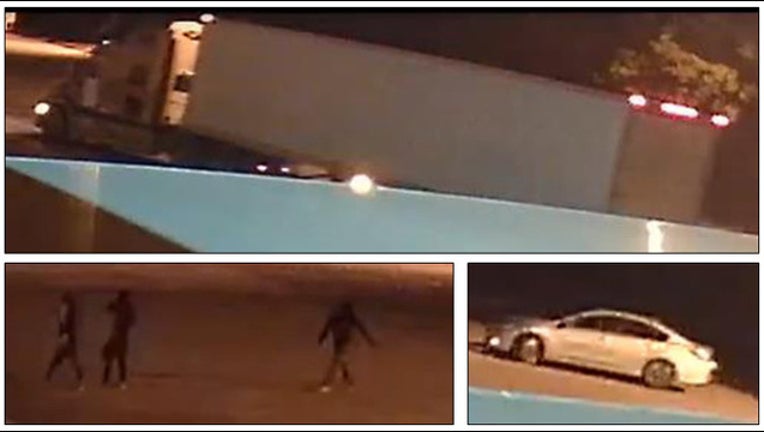 GWINNETT COUNTY, Ga. - Investigators in Georgia are looking for four suspects who are responsible for stealing almost a million dollars worth of electronics in less than three weeks.

Police say the first robbery happened on Sunday, Sept. 23 at the Dow Electronics warehouse on the 1600 block of Boggs Road in unincorporated Duluth.

Surveillance video shows the three suspects walking to the shipping bay door at around 10 p.m. Four hours later, the same suspects bring a commercial truck to the warehouse, parking its trailer in front of the door.

Police say the thieves stole over $350,000 in electronics from the area.

The trailer was also reported stolen in Atlanta. It was later recovered in Miami.

The second burglary happened between Oct. 5 and Oct. 8 at the Stampede Presentation Products on the 3500 block of Newpoint Place in unincorporated Lawrenceville.

In this burglary, the suspects used two commercial trucks to steal around $600,000 worth of electronics,

Detectives believe both crimes were possibly done by the same people and are asking for help to bring them in for questioning.

If you have any information about the case, please contact Gwinnett County Police detectives at 770-513-5300 or anonymously with Crime Stoppers at 404-577-8477.