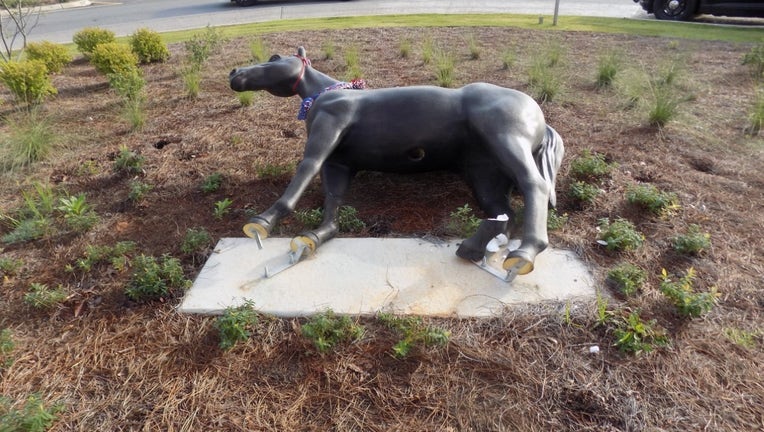 MILTON, Ga. - Police are searching for a suspect who toppled a Milton, Georgia statue over the weekend.

The Milton Police Department shared a photo of the damage to the bronzed horse statue, which used to be in Crabapple roundabout in the city.

According to officials, the statue honored Mark Law, an arborist for the city who designed it and other improvements in the area. Law died from esophageal cancer in 2019. It was installed at the roundabout last year after Law's family worked with the Milton Arts Council on a successful GoFundMe campaign.

Police say the statue was last seen standing Sunday around 3:30 a.m. and was found damaged around 6:46 a.m.

Investigators do not believe that the horse was hit by a car because there is no damage to the curb, shrubs, or nearby grass.

The statue, which has multiple broken legs, was taken by Milton's Public Works Department.

As of Tuesday, Milton police say they have not identified any possible suspect.

If you have any information about the vandalism, please call Milton detectives at 678-242-2613.