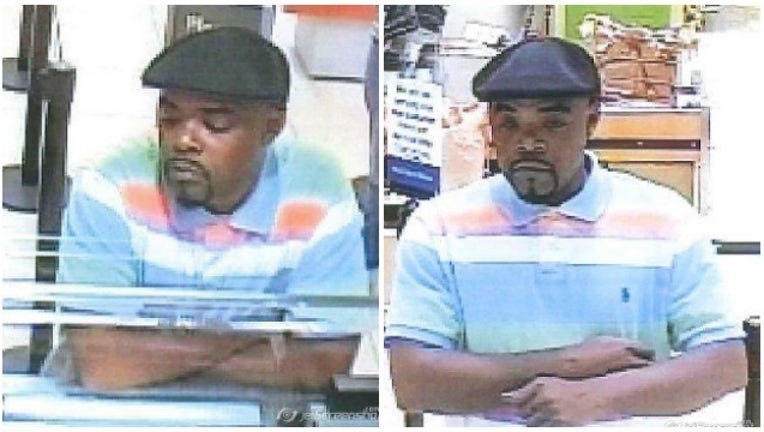 GWINNETT COUNTY, Ga. - Police are searching for a man accused of cashing more than $13,000 in forged checks at several metro Atlanta banks.

Police said the first incident took place on August 22, 2015 at a SunTrust Bank located inside the Publix on Sugarloaf Parkway in Lawrenceville. The suspect walked in shortly after noon and cashed a fake check for $4,765. The check was made payable to "Sean Clark," using a Pennsylvania driver's license as identification, according to police.

Four days later, on August 26, the same suspect cashed a fraudulent check for $4,560 at the SunTrust located in the 700 block of Duluth Highway in Lawrenceville. Again, the check was made payable to "Sean Clark," with the same Pennsylvania driver's license.

Later that day, shortly after 2 p.m., the same suspect cashed a fake check for $4,240, but this time it was made payable to "Andre Brown," using a different Pennsylvania driver's license as identification. This was at another SunTrust on Duluth Highway, about one mile away.

"Even though a different name and driver's license number was used, surveillance footage revealed it was the same suspect," police said in a news release.

Investigators said in late September of last year, the account holder of the cashed checks contacted SunTrust to report the illegal transactions. Police said the names and driver's license numbers don't belong to the suspect from the surveillance images.