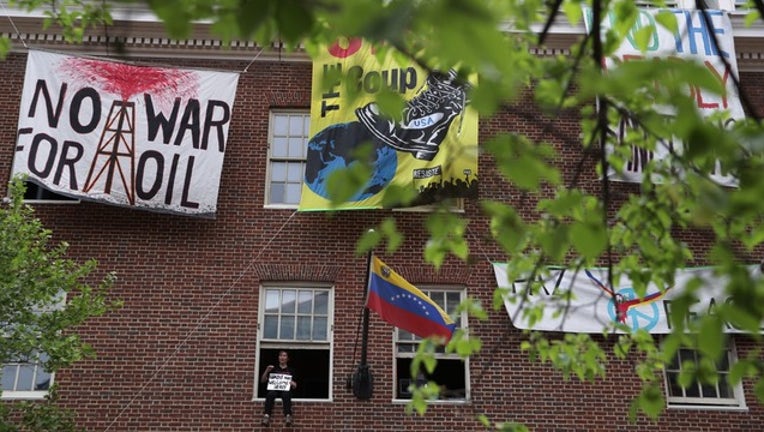 Ariel Gold of CodePink sits on a window of the Embassy of Venezuela during a news conference April 25, 2019 in Washington, DC. (Photo by Alex Wong/Getty Images)

WASHINGTON (AP) - Four demonstrators who have been staging a protest inside the Venezuelan Embassy in Washington for more than a month were arrested Thursday morning, according to a prominent activist leader.

Mara Verheyden-Hilliard, a lawyer for the activists, said she believed they had been removed from the building, but she was still trying to determine their location and what criminal faces they may be facing.

The protesters consider Nicolás Maduro to be the legitimate Venezuelan president. But the U.S. and more than 50 other countries say Maduro's recent reelection was fraudulent and are backing congressional leader Juan Guaidó's claim to the presidency.

Guaidó's newly named ambassador had requested the help of U.S. authorities in clearing the building.

The protest started with at least 30 activists staying at the embassy, but their numbers gradually dwindled. The building has been without power since last week and a crowd of Maduro supporters has frequently gathered to heckle the protesters from the street.