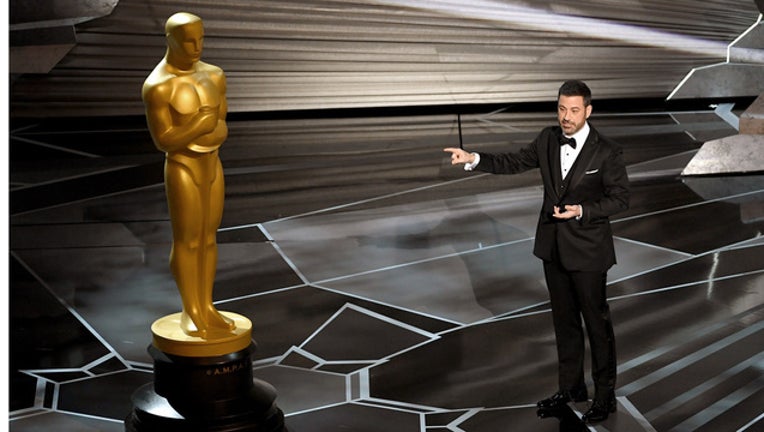 Christopher Nolan's World War II epic "Dunkirk" led all nominees with three awards for its technical craft: editing, sound editing and sound design. But the early awards were spread around widely in a year lacking a clear front-runner.

Host Jimmy Kimmel got the Oscars underway Sunday at the Dolby Theatre in Los Angeles with an opening monologue that mixed Weinstein punchlines with earnest comments about reforming gender equality in Hollywood. And of course, Kimmel - returning to the scene of the flub - dove straight into material about last year's infamous best-picture mix-up.

"I do want to mention, this year, when you hear your name called, don't get up right away," said Kimmel. "Give us a minute."

But while Kimmel spent a few moments on the fiasco known as Envelopegate, he expended far more minutes frankly and soberly discussing the parade of sexual harassment allegations that have coursed through the movie business in the wake of the revelations regarding Weinstein. He also spoke straightforwardly about the industry's poor record for female directors and equal pay.

Gesturing to a giant statue on the stage, he praised Oscar, himself for keeping "his hands where you can see them" and for having "no penis at all." But Kimmel introduced the broadcast as "a night for positivity," and cited, among other things, the box-office sensation of "Black Panther."

"I remember a time when the major studios didn't believe a woman or a minority could open a super hero movie - and the reason I remember that time is because it was March of last year," said Kimmel.

"I did it all by myself," deadpanned Janney, who added after a pause: "Nothing could be further from the truth."

Rockwell dedicated his award to his late friend and fellow New York actor Philip Seymour Hoffman, who died in 2014. "For my buddy, Phil Hoffman," said Rockwell, raising his Oscar.

Kimmel, with stopwatch in hand, also emphasized keeping acceptance speeches short. He promised the shortest speech would win a Jet Ski. Go long, and winners might get Lakeith Stansfield screaming "Get out!" as the actor briefly reprised his character from the Oscar-nominated "Get Out" on stage.

Best documentary went to Netflix's "Icarus," Bryan Fogel's investigation into doping in sports, aided by the assistance of Grigory Rodchenkov, the head of the Russian anti-doping laboratory who candidly discussed the doping scheme under Vladimir Putin. It's the first feature film Oscar for Netflix. Fogel dedicated the award to Rodchenkov, "our fearless whistleblower who now lives in grave danger."

"At least now we know Putin didn't rig this election," said Kimmel after the "Icarus" win.

In another topical moment, Pakistan-born comedian Kumail Nanjiani joined Kenyan-born Lupita Nyong'o to salute the so-called Dreamers - immigrants brought to the U.S. illegally as children and here without permanent protection from deportation. "Dreams are the foundation of Hollywood and dreams are the foundation of America. And, so, to all the Dreamers out there, we stand with you," Nanjiani said.

"The biggest thank you of all to the people of Mexico," said director Lee Unkrich to loud applause. "Marginalized people deserve to feel like they belong. Representation matters."

The ceremony is the crescendo of one of Hollywood's most turbulent awards seasons ever - one that saw cascading allegations of sexual harassment topple movie moguls, upended Oscar campaigns and new movements launched to improve gender equality throughout the industry.

No Golden Globes-style fashion protest was held by organizers of Time's Up, the initiative begun by several hundred prominent women in entertainment to combat sexual harassment. Their goals go beyond red carpets, organizers said in the lead-up to the Oscars. "We did the dress code thing and now we're doing the work," said #MeToo founder Tarana Burke on the red carpet.

Yet the #MeToo movement is sure to have a prominent place in the awards. Greta Gerwig ("Lady Bird") is just the fifth woman nominated for best director. Rachel Morrison "Mudbound" is the first woman nominated for best cinematography. Ashley Judd, the first big-name actress to go on the record with allegations of sexual misconduct against Weinstein, is among the scheduled presenters.

The parade of sexual harassment allegations has made the normal superficial red carpet a place of sometimes more serious discussion than attire. Scrutiny was falling Sunday on E! host Ryan Seacrest after his former stylist, Suzie Hardy, alleged sexual harassment against the red-carpet regular. Seacrest has denied it and E! has supported him. Best supporting actress Oscar nominee Mary J. Blige said Seacrest is "fighting for his life right now."

It's been an unusually lengthy - and often unpredictable - awards season, already an increasingly protracted horse race begun as most of the contenders bowed at film festivals last September. The Academy Awards were moved a week later this year because of the Olympics.

Twenty years ago, a "Titanic" sweep won record ratings for the Oscar broadcast. But ratings have recently been declining. Last year's show drew 32.9 million viewers for ABC, a four percent drop from the prior year. Even more worrisome was a slide in the key demographic of adults aged 18-49, whose viewership was down 14 percent from 2016.

Movie attendance also hit a 24-year low in 2017. But this year is already off to a strong start, thanks largely to Ryan Coogler's "Black Panther," which many analysts believe will play a prominent role at next year's Oscars. In three weeks, it has already grossed about $500 million domestically. The film's star, Chadwick Boseman, was placed front-and-center, at the Dolby Theatre.

This year, the academy prohibited the PwC accountants who handle the envelopes from using cellphones or social media during the show. Neither of the PwC representatives involved in the mishap last year, Brian Cullinan or Martha Ruiz, will return to the show.

However, multiple reports say that Warren Beatty and Faye Dunaway will be returning to again present best picture, a year after they announced "La La Land" as the winner instead of "Moonlight," because Cullinan handed them the wrong envelope. The "Bonnie and Clyde" duo will, 12 months later, get "take two."

With just a few minutes before the show started, Kimmel and his team emerged from his dressing room chanting, "Let's get it right this time!"