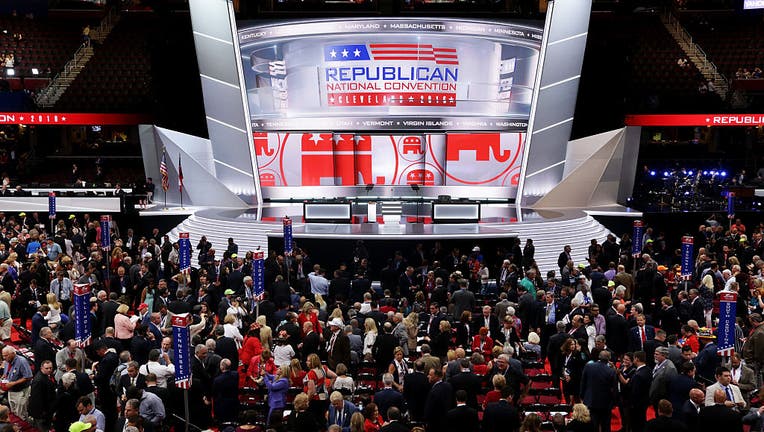 The stage is empty on the first day of the Republican National Convention on July 18, 2016 in Cleveland, Ohio. (Alex Wong/Getty Images)

SAVANNAH, Ga. - Organizers of the Republican National Convention are giving Georgia’s oldest city a close look as a possible replacement venue for the August convention after President Donald Trump dumped Charlotte, North Carolina, as the site where he’ll accept the GOP nomination.

Gov. Brian Kemp joined GOP convention CEO Marcia Lee Kelly on Monday for a tour of Savannah and its convention center on Hutchinson Island, which overlooks the city’s historic and tourist-friendly riverfront.

“We are honored to offer a truly unmatched experience to the Republican National Convention,” the Republican governor said in a statement, vowing that Savannah “will leave a lasting impression on Marcia Lee Kelly and her team.”

Trump announced last week that he was backing out of Charlotte because the state refused to guarantee the convention could be held without public health restrictions due to the pandemic. Contractual obligations will likely require some official convention business to remain in Charlotte. But Trump has made clear that he will deliver his nomination acceptance speech elsewhere.

The group was greeted by Savannah Mayor Van Johnson, City Hall spokesman Nick Zoller said. Johnson was openly critical of Kemp’s decision to start lifting business closures imposed to slow the spread of the coronavirus in late April. He sounded skeptical Monday about the city hosting the GOP convention.

“I am strongly concerned about the impact that a convention of this magnitude would have on the health, safety and welfare of our city, her citizens and our budget,” Johnson said in a statement. “That being said, I am not privy to, or familiar with, any proposal or plans relating to the 2020 Republican National Convention, but I am open and willing to hear what they have to say.”

RNC officials have said other cities under consideration as convention venues include Nashville, Tennessee, and the Florida cities of Miami, Orlando and Jacksonville, as well as New Orleans Las Vegas, Dallas and Phoenix.

With a population of roughly 150,000, Savannah is easily the smallest of those cities. The GOP convention would be the largest event to come to Savannah since President George W. Bush hosted the G-8 summit of world leaders on the Georgia coast in 2004.

While Bush and the world leaders held their meetings at the secluded Sea Island resort, Savannah was used as the summit hub for 5,000 international delegates and journalists.