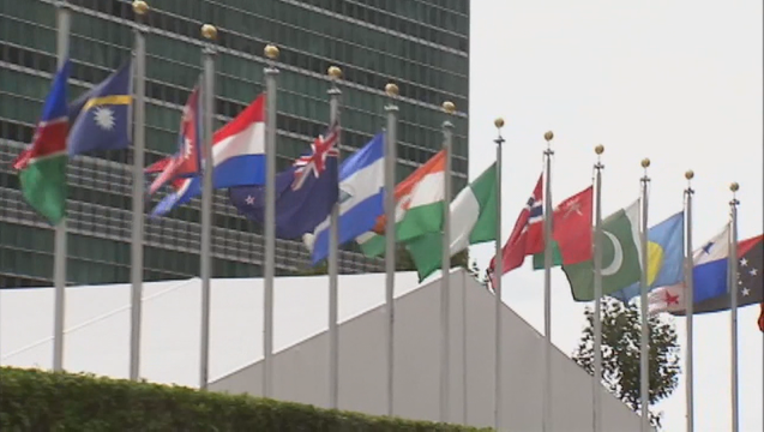 WASHINGTON (AP) - "Utter weakness and incompetence." ''Not a friend of democracy." ''Just a club for people to get together, talk and have a good time."

As President Donald Trump visits the United Nations, a look at some of his past tough comments about the world body:

- "Why is the UN condemning @Israel and doing nothing about Syria? What a disgrace," he tweeted in October 2011, one of a series of tweets about the organization that year. Trump said that September he was "increasingly concerned" with what he called "the UN's ploy against @Israel this coming week."

"We must stand firm against the UN's ploy to sabotage Israel -- -if the UN grants the PA statehood then we must immediately defund it," he wrote.

- "The cheap 12 inch sq. marble tiles behind speaker at UN always bothered me. I will replace with beautiful large marble slabs if they ask me," he tweeted in October 2012.

- In a speech at the AIPAC Policy Conference in Washington in March 2016, Trump took on what he described as "the utter weakness and incompetence of the United Nations."

-Angry at the Obama administration for not vetoing a U.N. resolution that criticized Israel for its settlement activity, the soon-to-be-president said in a Dec. 23, 2016 tweet that: "As to the U.N., things will be different after Jan. 20th."

-"The United Nations has such great potential but right now it is just a club for people to get together, talk and have a good time. So sad!" Trump tweeted on Dec. 26, 2016, shortly before his move to Washington.

- "The U.N. has such tremendous potential, not living up to its potential," he told reporters at his Mar-a-Lago resort in Florida in December 2016. "When do you see the United Nations solving problems? They don't. They cause problems. So, if it lives up to the potential, it's a great thing. And if it doesn't, it's a waste of time and money."