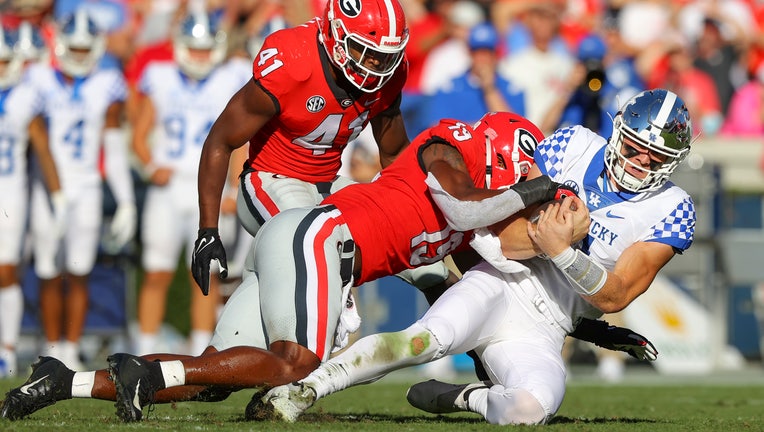 ATHENS, GA - OCTOBER 16: Will Levis #7 of the Kentucky Wildcats rushes for a first down as Adam Anderson #19 of the Georgia Bulldogs makes the tackle in the first half at Sanford Stadium on October 16, 2021 in Athens, Georgia. (Photo by Todd Kirkland

ATHENS, Ga. - With Georgia playing its first game as the nation’s No. 1-ranked team since 2008, Stetson Bennett tossed three touchdown passes and the Bulldogs got another stifling defensive effort in a 30-13 victory over No. 11 Kentucky on Saturday.

Bennett, starting his third straight game in place of injured JT Daniels, hooked up with freshman tight end Brock Bowers on a pair of scores.

The senior quarterback was 14 of 20 for 250 yards in another solid performance with Daniels watching from the sideline for the Bulldogs (7-0, 5-0 Southeastern Conference).

Bowers, who has emerged as one of Georgia’s most dynamic offensive weapons in his first college season, had five receptions for 101 yards.

Georgia’s defense allowed two touch down in a game for the first time all season — the second with 4 seconds remaining after Kentucky (6-1, 4-1) called a timeout to take one last shot at punching it in from the 1.

Otherwise, Georgia’s top-ranked defense lived up to the billing, limiting Kentucky to 249 total yards and blocking a pair of kicks.

The Wildcats pulled out all stops, even running a hook and lateral. But one week after rushing for 330 yards in a win over LSU, they had little success on the ground against Georgia’s fearsome defense, managing just 51 yards.

Kentucky trailed only 14-7 at halftime, matching Georgia’s smallest lead of the season after two quarters.

But the Bulldogs took the second-half kickoff and drove 75 yards in six plays to effectively finish off the Wildcats and gain a stranglehold on the SEC East race. Every other team in the division has at least one conference loss.

An apparent 59-yard touchdown pass to Bowers was negated by a holding penalty, but Bennett connected again with the freshman right end in the right corner of the end zone for the 27-yard score that did stand, pushing the lead to 21-7.

After a scoreless opening quarter, Georgia scored on back-to-back possessions. James Cook took a short pass 19 yards to the end zone, and Zamir White followed with a 24-yard scoring burst right up the middle.

Late in the first half, Kentucky finally put together a lengthy drive against the Bulldogs.

Catching a break when a video review overturned a fumble call, the Wildcats covered 75 yards in 13 plays, converting three times on third down. Will Levis capped it off with a 1-yard touchdown pass to Justin Rigg.

Kentucky squandered another scoring chance when Devonte Wyatt powered right up the middle to block a 33-yard field goal attempt on the final play of the third quarter.

But Levis and the Wildcats would not be denied on their final drive, the quarterback going to Wan’Dale Robinson for another short scoring pass with the crowd that remained at Sanford Stadium booing loudly over Kentucky going to such efforts for a meaningless TD.

After the Bulldogs scored a touchdown to increase their lead to 30-7, Podlesny was wide right with the kick.

That snapped an NCAA-record streak that stretched to 2014 and involved six kickers. Podlesny had been perfect on 71 PATs before his miss.

The streak was started by Marshall Morgan, who was followed by Patrick Beless, William Ham, David Marvin, Rodrigo Blankenship and Podlesny.