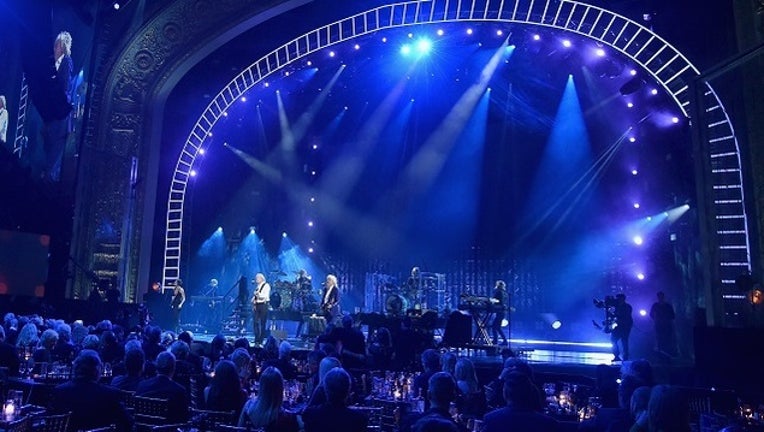 NEW YORK (AP) -- Stevie Nicks, who's already in the Rock and Roll Hall of Fame as a member of Fleetwood Mac, has been nominated for inclusion as a solo artist next year, along with other first-time nominees Def Leppard, Todd Rundgren, Devo, John Prine and Roxy Music.

Nine other artists are returning to the ballot for another try, including Janet Jackson, Radiohead and The Cure.

Generally, about five to seven nominees each year are voted into the hall, located in Cleveland, Ohio. Past inductees and industry experts vote on who gets in, and fans have a ballot, too. Winners are announced in December, with the 34th annual ceremony scheduled for March 29 at Brooklyn's Barclays Center.

Nicks was inducted with Fleetwood Mac in 1998. But she's maintained an active solo career, with her best-known songs coming in the 1980s, like "Edge of Seventeen," "Stand Back" and the Tom Petty duet, "Stop Draggin' My Heart Around."

The highly polished metal of Def Leppard sold tons of CDs back in the 1980s, led by hits like "Pour Some Sugar on Me" and "Photograph."

Rundgren has been overlooked through the years, despite 1970s-era hits like "Hello It's Me," "I Saw the Light" and "We Gotta Get You a Woman," and his track record as a producer of others' work.

Devo attracted punk-era attention with their theory of deevolution and oddball cover of "(I Can't Get No) Satisfaction." They also made hits of their own, including "Whip It" and "Beautiful World."

The artsy British band Roxy Music is best known for their romantic hits "More Than This" and "Love is the Drug." The country-folk artist Prine is a cancer survivor, with songs like "Angel From Montgomery" and the Iris DeMent duet "In Spite of Ourselves" in his discography. His new album, "The Tree of Forgiveness," is a career highlight.

Rapper and actor LL Cool J and the German electronic band Kraftwerk each received their fifth nomination. The explosive Detroit band MC5 is back for a fourth try, as are the 1960s rockers the Zombies.

Jackson has been nominated the past three years in a row and Rufus (featuring Chaka Kahn) is also a three-time nominee. The Cure, Radiohead and Rage Against the Machine are back for a second try.

Fans can make their feelings known on rockhall.org starting Tuesday. The top five vote-getters will be included as a "fan's ballot."

HBO will broadcast the induction at a later date and SiriusXM will have a live simulcast.