LOS ANGELES - Football fans had reason to celebrate on Thursday as the NFL released its full 2020 schedule, with the first game of the season set for Sept. 10, when the Texans will play the Chiefs.

Dates and locations for all preseason and regular season games were announced on each team's Twitter accounts on Thursday ahead of the full schedule, which was made available online at the NFL’s website.

The professional sports world has been hampered by the ongoing COVID-19 pandemic, with the fate of the NBA, NHL and MLB seasons still uncertain.

There are even doubts on whether the Tokyo Olympic Games, which have now been rescheduled to 2021, will occur, depending on the severity of the COVID-19 crisis at that time.

While there had been some speculation that the 2020 NFL season may be canceled due to the pandemic, the announcement of this year’s schedule can be taken as a strong indicator that the league still plans to move forward with play.

The NFL has set protocols for reopening team facilities and has told the 32 teams to have them in place by May 15. Commissioner Roger Goodell mapped out several phases of protocols in a memo obtained by The Associated Press. 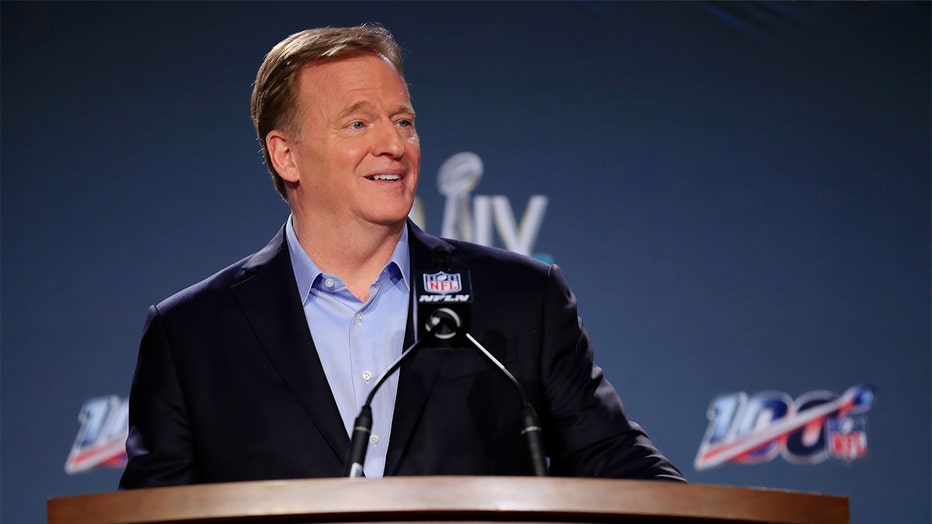 FILE -NFL Commissioner Roger Goodell speaks to the media during a press conference prior to Super Bowl LIV at the Hilton Miami Downtown on January 29, 2020 in Miami, Florida.

The first phase to deal with the coronavirus pandemic would involve a limited number of non-player personnel. That number initially would be 50% of the non-player employees and up to a total of 75 on any single day being approved to be at the facility. But state or local regulations could require a lower number.

What remains undetermined, though, is if fans will be allowed to attend said games due to COVID-19. Health officials, including Dr. Anthony Fauci, have stated that it is “inevitable” that there will be another wave of the coronavirus in fall.

The resuming of the NASCAR season indicates that it is possible to conduct professional sporting events in some way amid the ongoing COVID-19 pandemic. But NASCAR — a sport that already practices its own form of social distancing with drivers isolated in their own cars — is different from the NFL, where players are physically colliding into one another.

Brian Allen, center for the Los Angeles Rams, and Von Miller, Denver Broncos star and Super Bowl 50 MVP, had previously tested positive for COVID-19. Reports indicated that Allen was in good health after testing positive and that Miller had tested negative two weeks after his initial positive result. Both are reportedly in good health since their initial diagnosis in April.