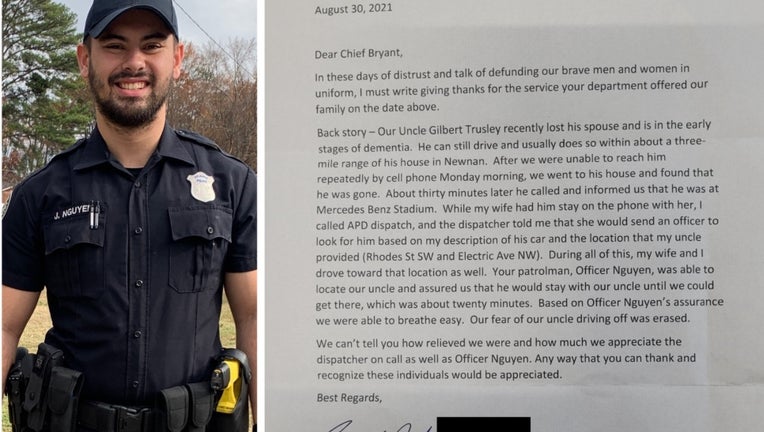 The Atlanta Police Department shared the letter, written after Officer J. Nguyen helped the author's uncle, who is diagnosed with dementia and was lost one day after leaving his home in Newnan and stopping at Mercedes-Benz Stadium in Atlanta. (Courte (FOX 5 Atlanta)

ATLANTA - The work of an Atlanta police officer inspired a heartfelt "Thank You" letter from a citizen to Atlanta Police Department Chief Rodney Bryant.

The Atlanta Police Department shared the letter, written after Officer J. Nguyen helped the author's uncle, who is diagnosed with dementia and was lost one day after leaving his home in Newnan and driving to Mercedes-Benz Stadium in Atlanta.

According to the letter, signed only by "Barry and Judy," the family tried to contact the man to no avail. He called his family about 30 minutes later to say he was at Mercedes-Benz Stadium.

The family called Atlanta police, according to the letter, and Nguyen located the man and his car. The officer and man waited about 20 minutes until Barry and Judy arrived to pick up their relative.

"Based on Officer Nguyen's assurance, we were able to breathe easy," the letter said. "Our fear of our uncle driving off was erased."

Barry and Judy expressed their relief and thanked Officer Nguyen and the police department.

"When officers take to the streets each day to patrol the community, respond to 911 calls and help those in need, most just view it as part of their job," a statement from APD says. "They do not look for praise or anticipate any recognition. It is their call of duty & their oath. They understand that helping others and being responsive to the community’s needs, is all in a day’s work. That said, it makes the Atlanta Police Department’s(APD) command staff and supervisors feel proud when citizens take a moment to recognize the good work of our officers. We beam with pride when a citizen takes the time to write in, makes a call, or sends a video of thanks highlighting the good work of our men and women in blue. And these gestures go a long way for the morale of our officers, who put so much on the line each day."