LOS ANGELES - A man featured on Nirvana’s iconic "Nevermind" album cover as a baby is suing the former band members, the estate of the late Kurt Cobain and others in a lawsuit filed this week, alleging that the nude image violated child pornography laws.

The album depicts Spencer Elden as a baby in the nude underwater, appearing to swim toward a dollar bill on a fishhook.

Elden, now 30, alleges in a lawsuit filed Tuesday that his "true identity and legal name are forever tied to the commercial sexual exploitation he experienced as a minor, which has been distributed and sold worldwide from the time he was a baby to the present day."

Non-sexualized nude images of infants are generally not considered child pornography under U.S. law, according to Variety. But the lawsuit argues that the dollar bill in the shot makes the baby appear "like a sex worker."

"The images exposed Spencer's intimate body part and lasciviously displayed Spencer's genitals from the time he was an infant to the present day," the lawsuit states, which was filed in the U.S. District Court's central district of California.

"Defendants reproduced child pornography depicting Spencer knowing and intending that it would be distributed internationally and that they would receive value from such widespread worldwide distribution," the suit reads.

The lawsuit states that Elden’s image "created massive commercial success for Nirvana," for which he never received any compensation. 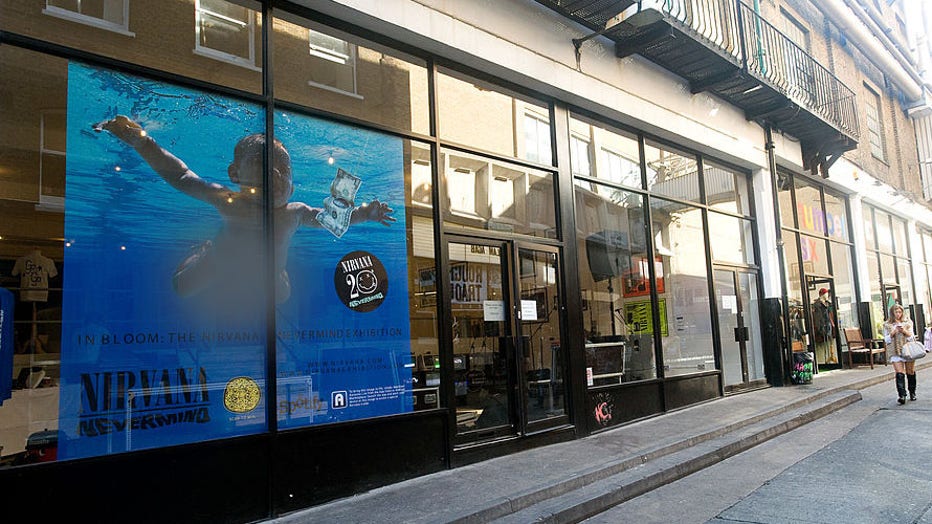 FILE - A general view of 'In Bloom: The Nirvana Exhibition', marking the 20th Anniversary of the release of Nirvana's Nevermind album, at the Loading Bay Gallery on Sept. 13, 2011, in London, England. A portion of the image has been blurred. (Photo b

Elden’s lawsuit is asking at least $150,000 from each of the defendants, who include band members Dave Grohl and Krist Novoselic, as well as Courtney Love, the executor of Kurt Cobain’s estate, and Cobain’s estate managers Heathy Parry and Guy Oseary. Cobain died in 1994.

Various record companies that released or distributed the album, along with others, are also listed as defendants.

"Nevermind" was Nirvana’s breakthrough album, featuring the hit "Smells Like Teen Spirit," and went to No. 1 on the Billboard charts. It has sold tens of millions of copies worldwide.

Elden has recreated the album cover multiple times since its initial release, including once in 2008 and again in 2016 to mark its 25th anniversary.