The Nevada Department of Wildlife is urging hunters to follow strict precautions to limit the spread of chronic wasting disease (CWD), which is responsible for turning deer and elk in other states into stumbling, drooling 'zombies.'

RENO, Nev. - A neurodegenerative disease is spreading through deer and elk populations in 25 states and provinces throughout the United States, turning infected animals into drooling, stumbling "zombies," and the Nevada Department of Wildlife is urging hunters to follow strict precautions to make sure that the disease doesn’t make it inside Nevada state lines.

Chronic wasting disease (CWD) is a transmissable spongiform encephalopathy (TSE) believed to be caused by a mutated protein, or prion, that attaches to and transforms healthy brain proteins into disfigured mutations, which cause the eventual deterioration of the brain until the condition becomes fatal. The brain and spinal cord are most directly affected.

Clinical signs to look out for include stumbling, poor body condition (low weight or emaciation), excessive drinking and salivation, lack of fear or people and difficulty running, which is why affected animals are often referred to as “zombie deer.”

The disease can incubate for over a year before an infected animal starts to show symptoms.

NDW encourages anyone who sees deer or elk exhibiting these symptoms to alert the nearest NDW office.

NDW reports that, to date, the disease has not been noted in deer or elk populations in Nevada, and that the closest state to have confirmed cases of the disease in herds of wild deer is Utah. 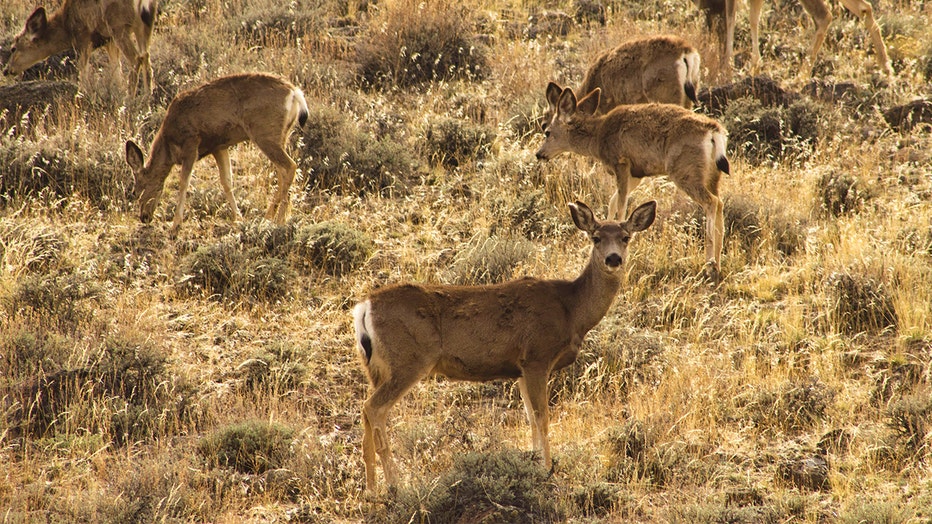 A herd of mule deer graze on Granite Range in Nevada. The Nevada Department of Wildlife is warning that a 'zombie' deer disease is spreading through 24 other states. (Tom Knudson/Sacramento Bee/Tribune News Service via Getty Images)

Nevada is one of 40 states and seven Canadian provinces that have implemented restrictions on the importation of certain parts of deer, elk and moose that were hunted in other states. Gov. Steve Sisolak approved Senate Bill 85 in May, which stipulates exactly which parts of the animal can be brought over state lines into Nevada.

To further prevent spread of CWD, the NDW is operating a handful of voluntary biological check stations throughout the month of October, which are mostly located at truck stops near state lines. NDW is encouraging hunters to bring any deer or elk they may have caught to a check station to allow biologists to collect samples to test for CWD.

NDW also highlights the necessity of proper disposal of deer or elk carcasses brought out of the field, which necessitates either burying the head and spinal cord or disposing of it in an approved landfill.

To date, there is no evidence of CWD being transmitted from animals to humans, according to the Centers for Disease Control. The agency, however, recommends hunters be cautious and avoid shooting, handling or eating the meat of infected animals or animals which may be infected, as well as to have all deer or elk tested for CWD before eating the meat.