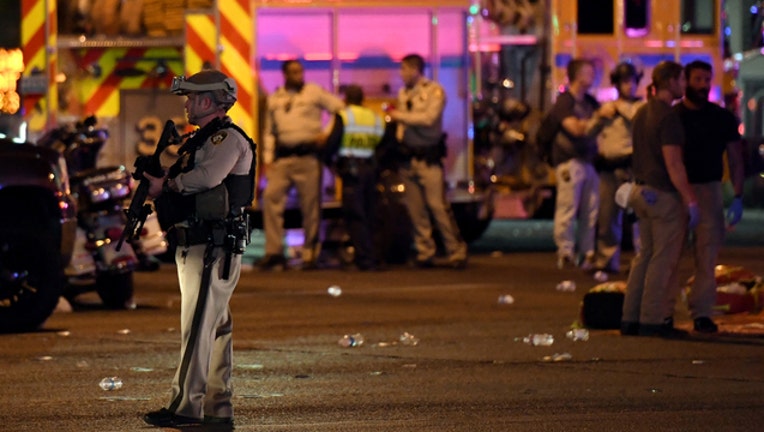 A Las Vegas Metropolitan Police Department officer stands in the intersection of Las Vegas Boulevard and Tropicana Ave. after a mass shooting at a country music festival on October 2, 2017 in Las Vegas, Nevada. (Photo by Ethan Miller/Getty Images)

LAS VEGAS - The deadliest mass shooting in U.S. history, which claimed the lives of at least 58 people and wounded another 515, has sparked the debate on gun laws once again.

Authorities say the gunman, identified as 64-year-old Stephen Craig Paddock of Mesquite, Nevada, rained down a hail of gunfire on concertgoers on the Las Vegas Strip from the 32nd floor of the Mandalay Bay hotel-casino.

Witnesses reported hearing hundreds of shots and video from the scene appeared to capture the sound of a rapid succession of gunfire, leading many to believe the shooter had automatic weapons, which are commonly referred to as machine guns.

While police have not confirmed if an automatic weapon was used in the attack, it is legal to own and possess one in the state of Nevada, according to the NRA’s Institute for Legislative Action.

The NRA-ILA says, “It is lawful to possess, purchase or sell a machine gun or silencer that is legally registered and possessed in compliance with all federal laws and regulations,” in the state of Nevada.

RELATED: How to check on loved ones in Nevada

While automatic weapons may be legal in Nevada, Ryan Cleckner, a former U.S. Army Ranger sniper and author of “Long Range Shooting Handbook,” told Fox News the seemingly inconsistent rate of Paddock’s shooting may indicate he was using a device, such as a Slide Fire stock, to mimic fully-automatic fire.

"These devices take advantage of a firearm’s natural recoil to ‘bump-fire’ the firearm thereby mimicking a machine gun without meeting the legal definition,” Cleckner explained to Fox News.

Cleckner said it would be far cheaper and easier to equip a weapon such as an AR-15 with a Slide Fire stock, which is legal and can be bought for about $300, than it would be to buy a machine gun.

Experts say a machine gun in the U.S. can cost up to $15,000 and requires the purchaser to undergo a months-long application process with the Bureau of Alcohol, Tobacco, Firearms and Explosives.