Some residents are concerned about plans to build the new Walton County jail near a residential neighborhood.

WALTON COUNTY, Ga. - Walton County has talked about replacing its old, deteriorating jail for years. But several Monroe residents said they’re all for it -- just not smack dab in the middle of their neighborhood.

"It just doesn’t make any sense to put a jail in the middle of a residential area," said Laura Gross, who said the home she’s lived in for 34 years would be directly next to the jail. "I have five grandchildren that are at my house all of the time. It’s a safety issue for me."

The plans call for the new facility to hold more than 750 inmates just a couple of hundred feet from Gross’ house, and within a mile of a school and several churches. 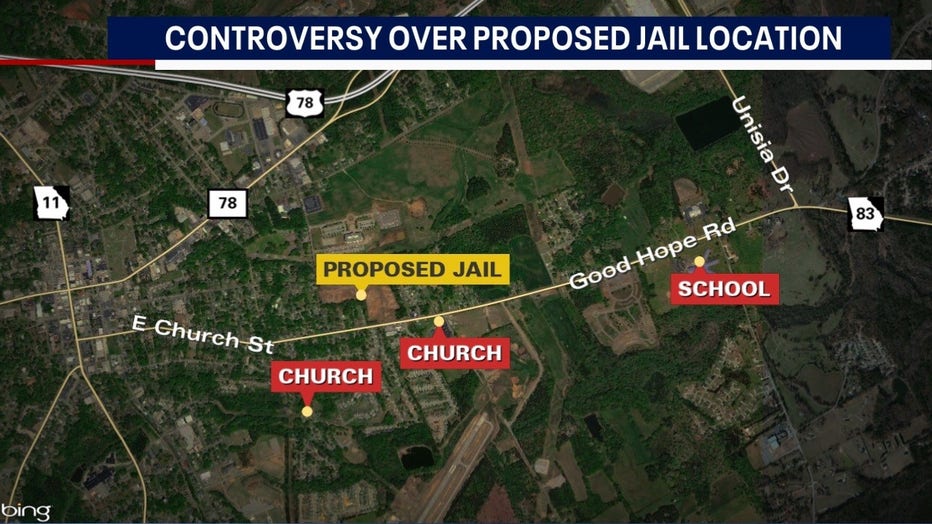 The news of the county’s plans to purchase the land was first reported by the Walton Tribune.

Sheriff Joe Chapman told the newspaper that the current jail on Madison Ave. is inadequate and unsafe.

However, this group of residents argued this new location on East Church St. is just too close for comfort – and it would make them feel unsafe.

"I think that the [Walton] county commission needs to not only think about what this does today to the community, but what it will do in the future," said Jason Sams, who lives less than a quarter-mile from the proposed site.

While the residents said it seemed like the proposal to put it at that location just popped up overnight, Sherriff Chapman told FOX 5 the project has been in the works for more than a decade.

"The site on Church St. was [one] of three that the Board of Commissioners had to choose from. This project started over 10 years ago," the Sherriff said. "Since then the Church St. site is the only one left available. I understand the concerns of some of the people in that area, but that site is no more residential than the current jail. Unfortunately, a jail is a necessity."

Patrice Broughton, a spokesperson for the Walton County commissioners said the site was chosen to consolidate law enforcement operations in the county.

"The site in question has been chosen because of its proximity to the Walton County Government building. This allows for easier travel of inmates to and from court, eliminating the use of public streets for transport," Broughton said via email. "The site also will house Sheriff Administration as well as future ambulance support.  The goal is to centralize public safety in this area, with the Government Building being the cornerstone."

Sams launched an online petition to protest the plan. He said he and several other neighbors will hold a public meeting on Thursday evening to rally support from the community.

Gross said that if the jail does end up being built, it could jeopardize the economic revitalization Monroe has been experiencing.

"To see this happen, it just seems like a pin in the balloon," she said. "We could lose so much momentum."

The Walton Tribune reported that the new jail was the centerpiece of a special-purpose local-option sales tax nearly a decade ago, but the project was never built.

The timeline for the project after the sale of the land to the county is finalized has not been released.