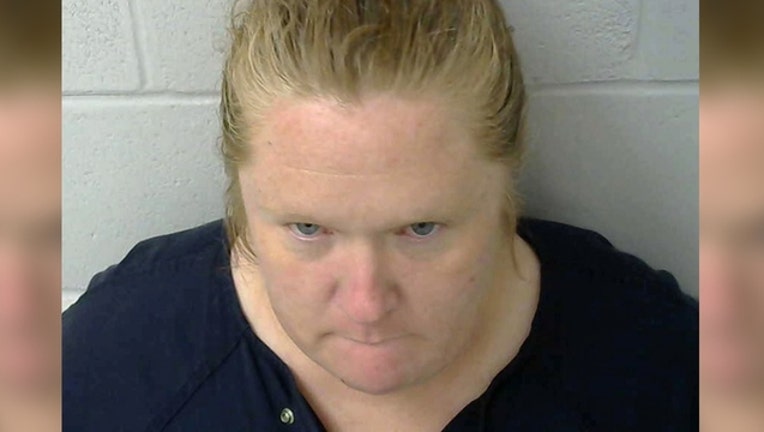 Amy Leann Hall, 38, is in custody after three teenagers were shot, one fatally in a shooting reported Thursday morning, Nov. 1, 2018, in the Nuyaka, Okla., area. (Okmulgee County Jail)

FOX News -- An Oklahoma woman accused of killing her 18-year-old son and wounding her two teenage daughters claimed she shot her children in their heads as they slept to protect them from their abusive father, authorities said Friday.

Amy Leann Hall, 38, shot her son, Kayson Toliver -- a star athlete and honor student -- in his bed early Thursday morning, the Okmulgee County Sheriff's Office said in an affidavit. He was found dead when police arrived at the home about 35 miles outside Tulsa.

After shooting her son, Hall then shot a 16-year-old daughter in her head while she slept, according to the affidavit. The girl remained in serious condition Friday.

A 14-year-old daughter managed to escape into a bathroom and began to cry, the affidavit said. The girl told her mother "it was OK," then left the bathroom and was able to take a pistol from Hall.

Her murder plan interrupted, Hall left the scene in a vehicle reaching speeds close to 100 mph until police stopped her several miles from the home, FOX 23 Tulsa reported. Police then took her into custody.

Hall claimed she was trying to “save” her children from their abusive father, the station reported. She said she also intended to kill herself. Police are continuing to investigate a motive.

Hall and the children's father were separated and engaged in a two-year custody battle. Last month, Hall filed an emergency order asking for temporary sole custody of the children. In 2016, the man claimed that Hall was mentally unstable and was psychologically abusive to the children.

Officials told FOX 23 they had previously responded to the home on domestic calls, but nothing had led to any arrests.

Toliver was a standout running back on the Beggs High School Golden Demons football team, the Tulsa World reported. He led the offense in what was his senior season with 580 yards and five touchdowns.

Toliver was also named a National Honor Society student in June, according to the paper.

“He was a very likable young man,” head football coach David Tenison told the World. “He had a good heart, good spirit. His smile was infectious. It just infected everyone around him. He made you want to smile.”