How a historically blue state like Minnesota could swing in 2020

A solidly blue state for the past half century, Minnesota has become an unquestioned presidential battleground after a narrowing margin that nearly saw the state turn red four years ago.

MINNEAPOLIS - Minnesota hasn’t gone red since it elected Richard Nixon in 1972 and a Republican hasn’t won a single statewide election since 2006, yet political experts say the North Star State’s blue streak could be coming to an end.

Minnesotans have voted blue for the past 11 presidential elections, and polls currently favor Joe Biden by more than nine points as of Oct. 6, but David Schultz, a professor of political science at Hamline University in Saint Paul, says there are various characteristics that could make a state like Minnesota swing.

One factor, Schultz says, is the gap that has increasingly narrowed between populations that considers themselves Democrat and Republican.

“Forty or 50 years ago, a lot of people think of Minnesota as the state of Walter Mondale or the state of Hubert Humphrey, Eugene McCarthy or Paul Wellstone, even. I mean the party I.D. among the citizens clearly favored the Democrats,” Schultz said.

He says that gap has since narrowed to just a few points.

The shift was evident in 2016 when Hillary Clinton nearly lost the state, winning by just 1.5 percentage points, or just over 44,000 votes. 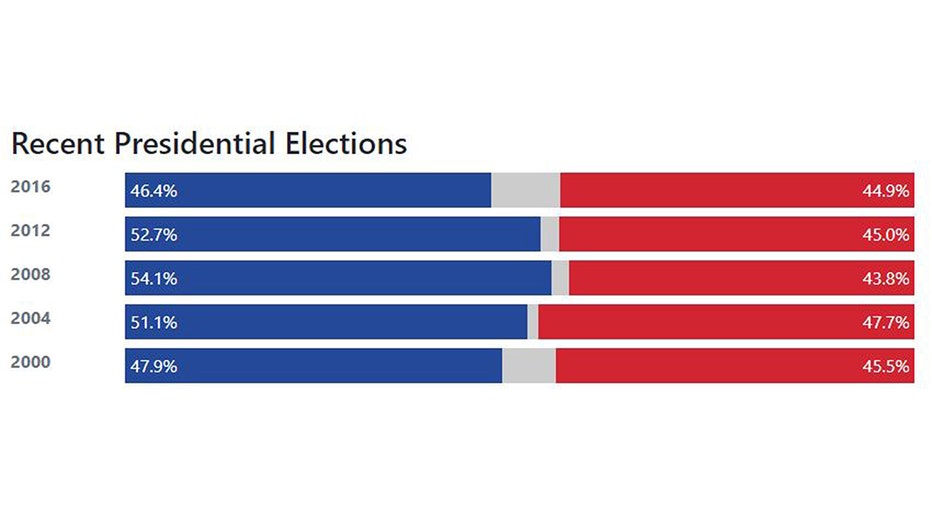 Another factor is Minnesota’s high population of “White working-class individuals without college a education,” Schultz said.

“Yes, Minneapolis-St. Paul, is very highly educated. It’s the home to the University of Minnesota and many other colleges, but once you get out of the Minneapolis-St. Paul bubble, we have this very traditional working-class population,” Schultz said.

Schultz refers to an area known as the “Iron Range,” which experts say could help deliver the battleground state’s 10 Electoral College votes to President Donald Trump.

Once a reliably blue region, the rural mining districts around Lake Superior were a Trump stronghold in 2016. The “Iron Range” fuels much of the United States' steel production and has benefited from the president's trade policies.

The region's seat in the U.S. House was one of the only ones to flip from Democratic to Republican control in 2018.

Which, Schultz says, is arguably the most critical reason why Democrats should be taking things seriously this election: a crucial split between a seemingly thriving Democratic Party.

“Minnesota is the only state in the country where the official name of the Democratic Party is called the Democratic-Farmer-Labor Party,” said Schultz.

Schultz explained that in 1944, Herbert Humphrey, who would later go on to be vice president under President Lyndon B. Johnson, brought the Democratic Party and Farmer-Labor Party together under one coalition.

“In its [the ‘Iron Range’] heyday, it, like many other mining areas, working class areas, were strongly Democratic as we know across the country, and they [working class voters] saw their jobs disappear and they gradually, because of social issues, because of loss of jobs, because of the sort of urban-rural split, have moved also into the Republican camp,” Schultz said.

Schultz said that a divide between Democrats over the direction of the party has contributed to the narrow gap that could play a role in a potential Trump victory in Minnesota in 2020.

Pro-environment and anti-gun positions within the Democratic Party in urban areas of the state have increasingly alienated some traditionally left-to-center Democratic White rural voters in the state’s mining and agricultural regions, Schultz said.

Both Biden and Trump have steered clear of the state’s most populated areas near Minneapolis to focus on blue-collar voters, some of whom shifted to Republicans for the first time in 2016. In September, Trump rallied in Bemidji, about 200 miles north of Minneapolis, while Biden campaigned in a suburb of Duluth, on the banks of Lake Superior, close to the Wisconsin border.

Trump has predicted victory in Minnesota in November despite the state’s long history of backing Democratic candidates.

Since narrowly losing Minnesota in 2016, Trump has increased his campaign’s focus on the state.

His message of “law and order” has been aimed nationally at White suburban and rural voters who may be concerned by protests that have sometimes become violent. That’s especially true in Minnesota, where the May killing of George Floyd by a police officer sparked a national reckoning on racism and police brutality.

In another show of the importance Trump has attached to winning Minnesota, Vice President Mike Pence, accompanied by presidential daughter Ivanka Trump, appeared at a “Cops for Trump” event in Minneapolis last month and made an unannounced stop at a hair salon left in rubble by violence that followed Floyd’s death. The events were aimed at driving home the president’s law-and-order message.

Schultz argued that Trump’s message to suburban residents — that they won’t be safe in “Joe Biden’s America” — has appeared to be somewhat successful following the ongoing protests that were sparked in Minnesota’s capital.

Schultz said following the riots that occurred after Floyd’s death, polls narrowed in the state. 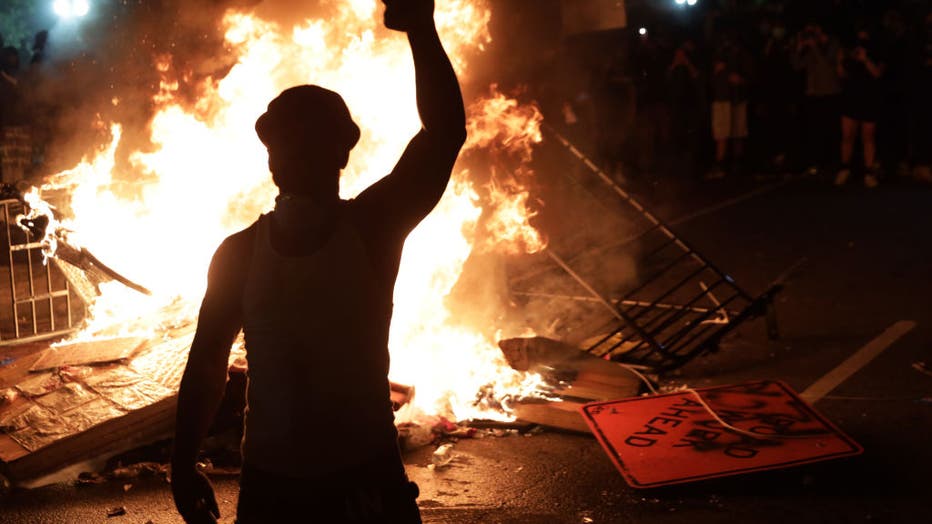 FILE - Demonstrators stand around a fire during a protest near the White House in response to the killing of George Floyd May 31, 2020 in Washington, DC. Former Minneapolis police officer Derek Chauvin was fired then arrested for Floyd's death and is

But Trump’s message to suburban voters still doesn’t seem to be enough to catch up to Biden in the state.

Trump’s campaign slashed its TV ads in the Twin Cities by nearly 90 percent the first week of October, and has been unable to cut into Biden's lead in polls.

According to recent polling by Fivethirtyeight, a website dedicated to political analysis, Biden has maintained a steady lead in Minnesota by a minimum of four points since June. Less than a month out from Election Day, Biden has seen his highest numbers yet with a consistent lead over Trump of at least 50 percent of likely voters since September.

Trump’s reelection campaign had originally booked 422 ads in early October on two TV stations that have reported to the Federal Communications Commission, but has since cut back to 58 spots on those stations — an 87% reduction.

Democratic leaders warn that Biden still may have his work cut out for him if he wants to counter those fears.

Duluth Mayor Emily Larson said the Trump campaign has far outpaced Biden in local yard signs — which indicates enthusiasm, but may not ultimately affect the outcome.

“One of the things the Trump campaign has been very good about is visibility in Duluth, but also in areas around Duluth,” Larson told the Associated Press.

One unique characteristic about the Upper Midwest region consisting of states like Minnesota, Wisconsin and Michigan is that they are all swing states and all have a similar demographic.

Kathryn Pearson, a political science professor at the University of Minnesota, explained that where one candidate campaigns can impact a neighboring state.

According to Pearson, four years ago, Minnesota was under the radar for national political operations. What greatly contributed to such a thin margin in 2016 was a lack of campaigning between both Clinton’s and Trump’s camps.

“President Trump came at the 11th hour, at the last minute, to campaign in the state,” Pearson said. “And the Clinton campaign did not really campaign here very hard, and so there wasn’t a lot of campaign activity that often comes with voter mobilization.”

RELATED: Despite long stretch of Democratic victories, Wisconsin has been a battleground for decades

Had both parties known how close the race in the state would be in 2016, Pearson said much more activity would likely have been evident from both sides leading up to the election, as it has been in 2020.

Neighboring Wisconsin, a battleground state which turned red in 2016 largely due to Clinton’s inability to achieve party unity, still has an impact on voter perception in Minnesota and vice versa, Pearson said.

Bernie Sanders beat Clinton in Minnesota’s caucus and also swept Wisconsin in every county but Milwaukee County. Sanders supporters rejected establishment politics, which contributed to Clinton’s defeat in the Badger State and a disconcertingly close victory in Minnesota.

“There are some demographic similarities and differences between the two states,” said Pearson. “They are two distinct states, but because they share a border, candidates can often easily do a campaign event in one state in the morning and one state in the afternoon or have an event near the border that draws people from both states.”

“You can run an ad on FOX 9 and get 60 miles, probably 70 miles into western Wisconsin,” said Schultz. “Run an ad in Minnesota, you can cover a decent chunk in Wisconsin.” Which might explain the lack of campaigning four years ago, Schultz suggested.

Schultz said he found both Trump and Biden have even taken out ads north of the border in Winnipeg, more than 400 miles north of Minneapolis, on television and radio stations to reach the northernmost parts of Minnesota.