Milpitas teacher on leave after dressing in blackface

Karrington Kenney posted the video on Twitter that school administrators verified is legit. Kenney is the vice president of the Black Student Union at Milpitas High School. She said the school has about 80 African American students out of a population of 3,300 students. She said, while the costume may have intended to be funny, no one is laughing. Azenith Smith reports

MILPITAS, Calif. - An investigation is underway after a Milpitas high school teacher was caught on camera wearing blackface to school.

KTVU has learned that the teacher, who has not been identified, is on administrative leave after student Karrington Kenney, captured him on video Thursday in class dressed as Common, the rapper. The video, which the school verified as legitimate, shows the teacher's face is painted black.

While the teacher may have thought the Halloween costume was funny, Kenney said she and her friends are not laughing.

“He is a white male so he came to school with his face painted and he tried to act as if he was the rapper,” said Kenney, who is the vice president of the Black Student Union at Milpitas High School. She said the school has about 80 African American students out of a population of 3,300 students.

“I go to a very diverse school and to see that he really thought it was okay, it was a joke, it really hurts especially being one of the handful of black people that go to the school,” she added. Kenney said she hopes the teacher is fired.  because she no longer feels safe. 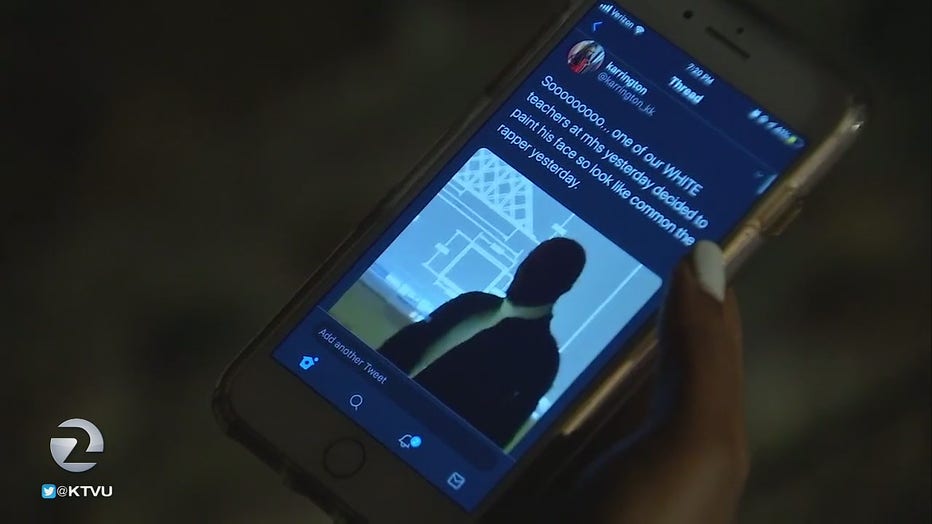 The Milpitas Unified School District issued a statement on Sunday: “Blackface paint has a historical and present day connotation of racism that demeans those of African ancestry. The act was disparaging to our students, parents, colleagues and the Milpitas community we serve.”

Norwood said he hopes the teacher was simply unaware of what it means to dress in blackface as a white man.

“I believe that could be the case knowing the staff and leaders at Milpitas Unified School District but that doesn't dismiss the fact that it happened," Norwood said.