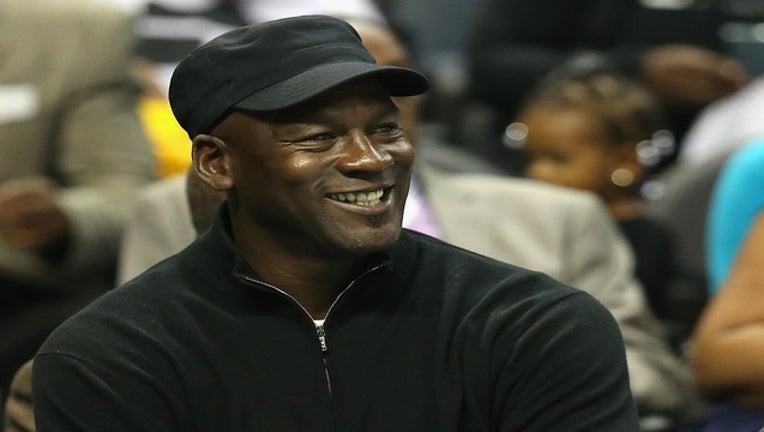 CHARLOTTE, NC - NOVEMBER 03: Owner of the Charlotte Hornets, Michael Jordan, watches on during their game against the Chicago Bulls at Time Warner Cable Arena on November 3, 2015 in Charlotte, North Carolina (Photo by Streeter Lecka/Getty Images)

WILMINGTON, N.C. (AP) - Stephanie Parker isn't quite sure how her family of six would have managed the last two months without the help of Michael Jordan and the American Red Cross following Hurricane Florence.

So when Parker met Jordan on Tuesday she couldn't hold back giving the owner of the NBA's Charlotte Hornets a big hug and a thank you.

"It means he hasn't forgotten," Parker told The Associated Press about Jordan's visit to Wilmington, North Carolina. "It means we are important."

Jordan returned to his hometown wearing North Carolina Tar Heels blue and met with some hurricane victims, many of whom have benefited from his $2 million donation in September. Jordan gave $1 million each to the Red Cross and the Foundation for the Carolinas Hurricane Florence Response Fund.

"I can give money all day long, but at some point you want them to understand you're human," Jordan told AP.

Jordan handed out Thanksgiving dinners at a home improvement store and gave away Jordan Brand shoes at a Boys & Girls Club Tuesday where he once played as a child.

Parker has lived the nightmare that's become all too familiar for hurricane victims around the country.

She, her husband, and their four children ages 3 to 8 heeded the warnings to evacuate the area. They took refuge in a Red Cross shelter, but when they returned, their apartment was flooded with two feet of water and their minivan crushed by a fallen tree. They spent nearly two months in shelters until recently being placed in a hotel while they await permanent housing.

"It's been stressful," she said, taking a long, deep breath. "At first it was really, really hard to realize that you lost everything. But people like Michael Jordan donating to the Red Cross and donating to people who have gone through what we've gone through is an incredible blessing. We are so very, very thankful."

Jordan broke into a wide smile when asked about his meeting with Parker.

Jordan said he'll continue to monitor the hurricane recovery efforts and would consider partnering with others to continue to help improve living conditions.

American Red Cross executive director James Jarvis, who is based out of Wilmington, said that the organization set aside a $50 million budget to help people affected by Hurricane Florence.

Jarvis said at the height of the storm the Red Cross sheltered more than 20,000 people in 172 locations. They provided 1.3 million meals and snacks. They've also distributed money to more than 6,500 families, doling out more than $3.8 million to help families get on the road to recovery.

"I wanted to be an igniter to the process," Jordan said of his initial donation. "But it's going to take a long time before things get back to normal. Whatever way I can contribute I will."

He also hopes that Charlotte hosting the All-Star game in February will provide an impetus for more financial aid to the region.

"I am pretty sure that the league will have some support systems that will reach out to this community," Jordan said. "And we are going to do a lot in Charlotte, too. But the overall game is about helping other people, so I can see it reaching all the way down to this area."

Natalie English, the president and CEO of the Wilmington Chamber of Commerce, said it's still too early to estimate the financial damage to the area.

But she said Jordan's donations resonated in the community.

"I think it means a lot to people here that Michael remembers his home and that he cares about where he was for his formative years and he is giving back to help restore the community," English said.

This is not a one-time deal for Jordan.

Fred Lynch coached Jordan when he was 15-year-old freshman playing on the junior high school basketball team at Laney High School in Wilmington. He sustained minor damage to his nearby home, but said several neighbors only a block away suffered total destruction as a result of flooding and wind damage to Hurricane Florence.

The 55-year-old Jordan still has an aunt, cousins and friends here and his nephew who attends college at UNC Wilmington. Jordan was most recently here in April at his high school filming a Gatorade commercial.

Lynch said he wasn't surprised when Jordan stepped up to help the people of Wilmington and the surrounding areas - donating money and his time.

"From the time I coached him as a ninth grade, he was always looking out for people," Lynch said. "He's always trying to do the right thing and always trying to better himself and his community. That's pretty much what he's been about his entire career."