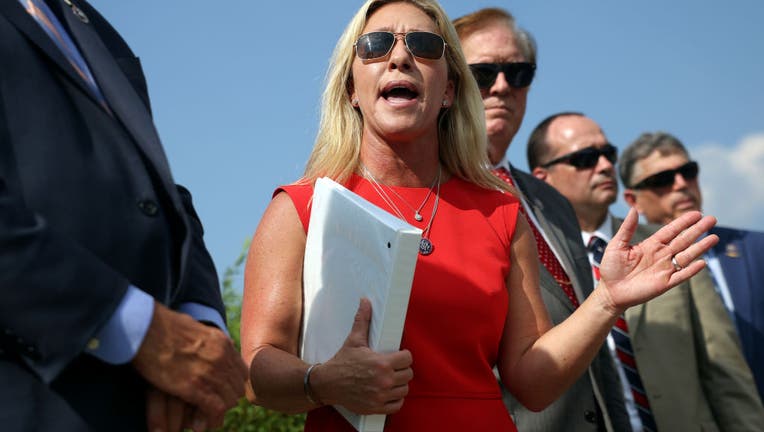 U.S. Rep. Marjorie Taylor Greene (R-GA) speaks at a news conference on the infrastructure bill with members of the House Freedom Caucus, outside the Capitol Building on August 23, 2021 in Washington, DC. (Photo by Kevin Dietsch/Getty Images)

WASHINGTON, D.C. - U.S. Rep. Marjorie Taylor Greene has renewed her calls to impeach President Joe Biden following the deaths of over a dozen U.S. service members in a deadly suicide bombing at the Kabul airport.

Writing on Twitter Friday morning, the Georgia Republican said that "It’s time for Congress to hold this administration accountable. Joe Biden must be impeached. Immediately. "

The freshman congresswoman had introduced a trio of impeachment resolutions against Biden last week, calling for him to be removed from office over his handling of U.S. troops in Afghanistan.

In the resolutions, Greene accused the president of "dereliction of duty," saying that he "failed to secure the extraction of thousands of American civilians and Afghan Allies" and "armed our enemies."

Greene has also introduced resolutions to impeach Biden over his administration's handling of the southern border and the extension of the evictions moratorium - an act that the Supreme Court blocked on Thursday.

"In seven short months, Joe Biden has caused America to lose the respect of the entire world. The evidence is clear and his actions are so egregious that he must be impeached," Greene said in a statement.

While the impeachment resolutions are unlikely to gain momentum in the House, multiple Republican representatives including South Carolina Rep. Jeff Duncan and Tennessee Rep. Diana Harshberger have cosponsored the articles.

Thursday was the deadliest day for U.S. forces in Afghanistan since August 2011, when a helicopter was shot down by an insurgent armed with a rocket-propelled grenade, killing 30 American troops and eight Afghans.

The administration has been widely blamed for a chaotic and deadly evacuation that began in earnest only after the collapse of the U.S.-backed Afghan government and the Taliban’s takeover of the country. More than 100,000 people have been evacuated so far, Afghans, Americans and others.

The U.S.-led airlift has continued even as commanders and officials were recovering from Thursday’s devastation. The White House said Friday morning that 8,500 evacuees had been flown out of Kabul aboard U.S. military aircraft in the previous 24 hours, as well as about 4,000 people on coalition flights. That is about the same combined total as the day before the attacks.

The coalition’s evacuation flights are scaling back, and the U.S. is scheduled to finish its evacuation operation by Tuesday. As many as 1,000 Americans and many more Afghans are still struggling to get out of Kabul.