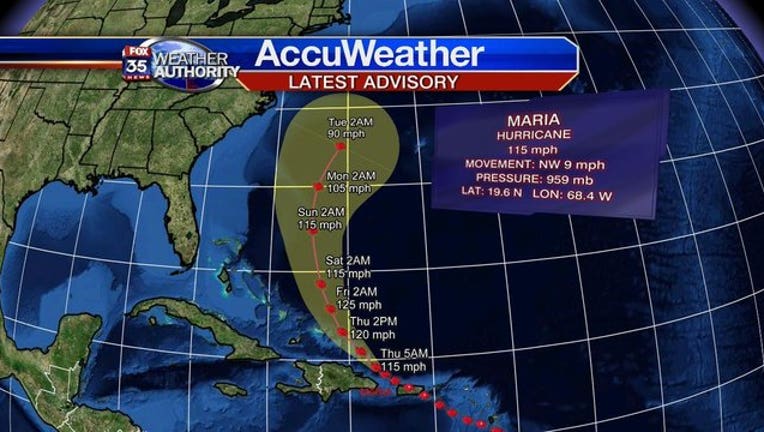 SAN JUAN, Puerto Rico (AP) - Hurricane Maria is lashing the northeastern Dominican Republic early Thursday and is expected to pass near the Turks and Caicos later in the day.

The Category 3 storm's maximum sustained winds are near 115 mph (185 kph) and the U.S. National Hurricane Center says some strengthening is possible during the next day or so.

Maria, which has killed at least 10 people across the Caribbean, is centered about 70 miles (110 kilometers) north of Punta Cana, Dominican Republic, and is moving northwest near 9 mph (15 kph).

Meanwhile, Puerto Ricans are rebuilding after the hurricane slammed into the U.S. territory Wednesday, crushing concrete balconies and paralyzing the island with landslides, flooding and downed trees.

Tens of thousands of Puerto Ricans stunned by a hurricane that crushed concrete balconies and paralyzed the island with landslides, flooding and downed trees vowed to slowly rebuild amid an economic crisis as rescue crews fanned out across the U.S. territory.

The extent of the damage is unknown given that dozens of municipalities remain isolated and without communication after Maria hit the island Wednesday morning as a Category 4 storm with 155 mph winds, the strongest hurricane to hit Puerto Rico in over 80 years.

Uprooted trees and widespread flooding blocked many highways and streets across the island, creating a maze that forced drivers to go against traffic and past police cars that used loudspeakers to warn people they must respect a 6 p.m. to 6 a.m. curfew imposed by the governor to ensure everyone's safety.