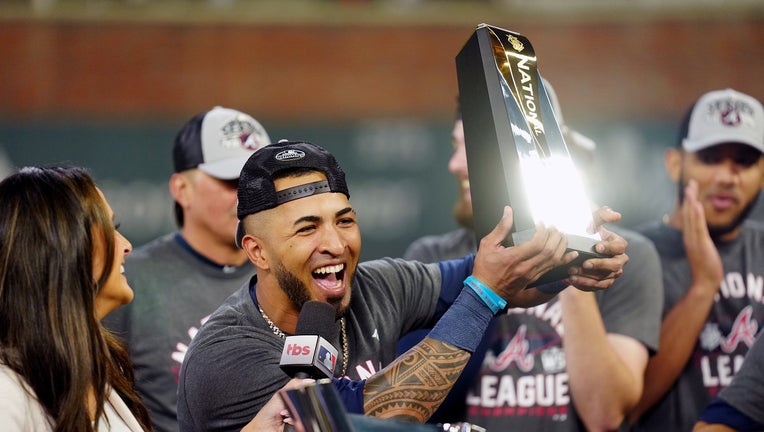 Eddie Rosario #8 of the Atlanta Braves holds up the 2021 National League MVP Trophy after the Braves defeated the Los Angeles Dodgers in Game 6 of the NLCS to advance to the World Series at Truist Park on Saturday, October 23, 2021 in Atlanta, Georgi

ATLANTA - Eddie Rosario talked the other day about his lucky lumber, a 33 1/2-inch, 31-ounce Chandler Bat that started to heat up with a four-hit night in mid-September.

"I’ve been using that bat that I hit for the cycle with and it has not disappointed," he said through a translator after his second four-hit game of the NL Championship Series. "Man, this bat has not let me down yet."

Well, he topped that on Saturday night, becoming MVP of the NLCS. As the crowd chanted his name, Rosario hoisted the award.

"It’s truly a great moment, not just in my career, but in my life, as well," he said. "But I want more. I want to win the World Series."

Rosario hit a tiebreaking, three-run homer off Dodgers ace Walker Buehler in the fourth inning, lifting the Atlanta Braves over Los Angeles 4-2 for their first NL pennant since 1999 and a Series matchup with the Houston Astros.

"We just couldn’t figure him out," Dodgers manager Dave Roberts said. "He beat us the other way. He beat us to the pull side. He got hits off lefties, off righties. We tried to spin him. We went hard. We just didn’t have an answer for him."

Less than three months after he was traded by Cleveland, which sent the Braves money to take him away, the 30-year-old outfielder had six multi-hit games against the Dodgers. He hit .560 (14 for 25) with three homers and nine RBIs, giving him a 1.040 slugging percentage and 1.647 OPS.

He has hit safely in all 10 postseason games, batting .474 with 11 RBIs from the leadoff spot, ahead of Freddie Freeman.

"It doesn’t matter what arm they’re throwing with, he’s just so locked in," Braves manager Brian Snitker said. "I don’t know that I’ve ever seen a guy like that for, this has been a long while now."

No hit was bigger than Rosario’s home run in the fourth inning. With the score 1-1, he fouled off three pitches around a ball that left the count at 1-2, then sent a cutter down the right-field line at 105 mph, the ball carrying 361 feet.

"I feel like I’ve had a good first half of my career," Rosario said. "I feel like I was vying for two All-Star appearances. I feel like I deserved them. That didn’t happen, so I kept just vying for the next award or accolade, and this was it."

Before this October, Rosario was known mostly for stepping up against Cleveland. During six seasons with Minnesota, he hit .301 with 22 homers and 47 RBIs in 93 games against the Indians, prompting Cleveland to sign him as a free agent to an $8 million, one-year contract with funds saved after trading Francisco Lindor and Carlos Carrasco to the New York Mets.

Rosario batted .254 with seven homers and 46 RBIs for the Indians and was on the injured list with an oblique strain when he was traded to Atlanta on July 30 for infielder Pablo Sandoval, who was immediately released. Cleveland sent the Braves $500,000 to offset part of the $2,795,699 remaining in Rosario’s salary.

"I wanted to illustrate the type of ballplayer that I am and showcase that I am capable of doing these things," Rosario said.

He didn’t return the major leagues until Aug. 28, and he hit .271 with seven homers and 16 RBIs in 96 at-bats for the Braves, one of four outfielders brought in along with Joc Pederson, Adam Duvall and Jorge Soler.

"To be honest, it was a competition at first," Rosario said. "All four of us showed up and I think we all wanted to get some playing time and be in the lineup. And obviously the three or guys they were having success on the field, so for me it was definitely a little bit of a sense of urgency to kind of push the envelope a little bit and try to work my way into the lineup."

Turns out, heat helped Rosario’s bat to get hot.

"The first two months is 40 degrees all the time in Cleveland," said Rosario, from Puerto Rico. "When it’s hot I feel better."

Rosario hit for the cycle on Sept. 19 against San Francisco, helping the Braves stop a four-game skid and build a two-game lead over Philadelphia in the NL East.

He batted .308 (4 for 13) with two RBIs in the four-game Division Series win over Milwaukee.

Heading into the Series, fans chanting "Ed-die! Ed-die!" have become a nightly occurrence at Truist Park.

"It motivates me to come through in big moments," Rosario said. "The pitcher hears a little bit and it almost forces him to throw the pitch you want to see."