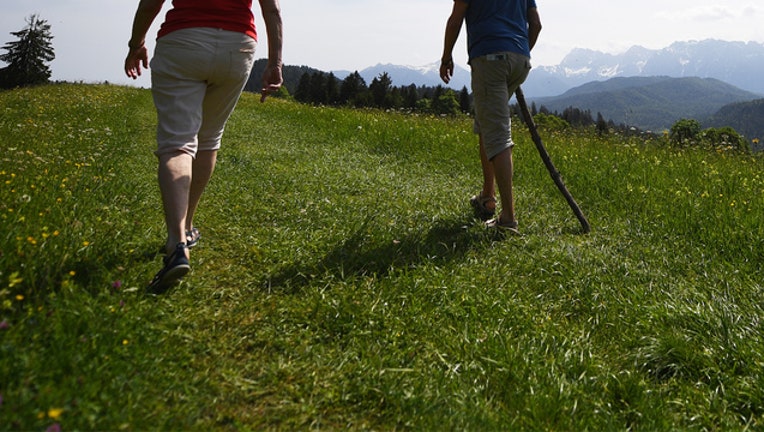 10 June 2019, Bavaria, Garmisch-Partenkirchen: Two hikers are on their way at Eckbauer in the Wettersteingebirge. Photo: Angelika Warmuth/dpa (Photo by Angelika Warmuth/picture alliance via Getty Images)

SAN ANTONIO, Texas (FOX 7 Austin) - Police officers in San Antonio were searching for two lost hikers at the end of July in the Government Canyon State Park after they had taken refuge in a tree from what they thought was a feral hog.

It turned out to be nothing more than rumble strips on a nearby road.

According to Texas Parks and Wildlife Department law enforcement, the San Antonio Police Department informed them of a 911 missing person call coming from somewhere in the Government Canyon State Park around 11:30 p.m. on Friday, June 21. The hiker had reported that an animal had been following her and growling, so she climbed a tree for safety.

Park police officers searched her last reported location but were unable to locate her. The officer reached out to the missing hiker on her cell phone to reassure her help was on the way.

She urged him to please hurry because an animal she believed to be a wild pig was nearby and growling. He informed her he would turn on his truck siren and asked her to listen.

She was unable to hear his siren, so the officer told her to use her iPhone to send him her location by text message, which she did. The officer then hiked to that location and found her and a male subject in a tree. She warned the officer that the pig was still close by, and she heard it just a few minutes before he arrived. Shortly after that, the officer heard a car drive over the rumble strips nearby on Galm Road and watched as the woman’s body language immediately changed.

The officer asked if they believed the noise they just heard was a pig and both nodded.

He explained it was only cars crossing rumble strips on the road nearby. Embarrassed by the misperceived threat, the lost hikers were reassured by the officer that the unknown can be scary and their reaction surprisingly common.