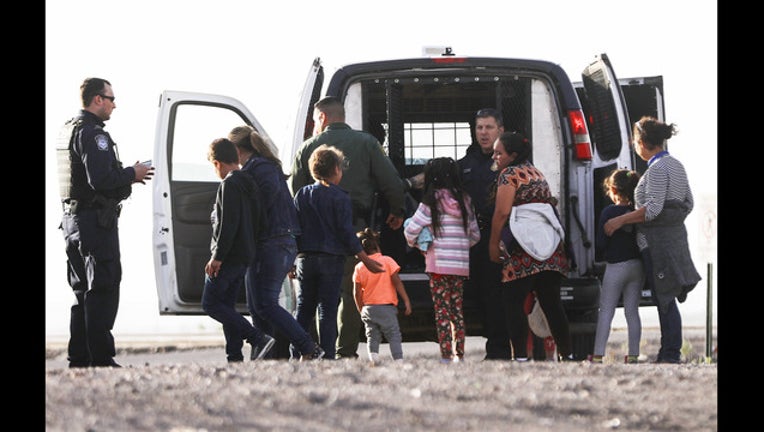 Migrants are detained by U.S. Customs and Border Protection (CBP) agents along with the U.S. Border Patrol after crossing to the U.S. side of the U.S.-Mexico border on May 17, 2019 in Sunland Park, New Mexico. (Photo by Mario Tama/Getty Images)

CLINT, Texas (AP) -- Attorneys visiting a Texas Border Patrol station this week were shocked to find more than 250 infants, children and teens being held inside a windowless complex, struggling to care for each other with inadequate food, water and sanitation.

It's a scene that is being repeated at other immigration facilities overwhelmed with too many migrant children and nowhere to put them.

"This facility wasn't even on our radar before we came down here," said law professor Warren Binford, a member of the team that interviewed dozens of children detained at the facility in Clint, about a half-hour drive from El Paso. Fifteen children had the flu, another 10 were quarantined.

At a Border Patrol station in McAllen, Texas, last week, attorney Toby Gialluca, said all the children she talked to were very sick with high fevers, coughing, and wearing soiled clothes crusted with mucus and dirt after their long trip north.

"Everyone is sick. Everyone. They're using their clothes to wipe mucus off the children, wipe vomit off the children. Most of the little children are not fully clothed," she said.

At both detention facilities, the children told attorneys that guards instructed girls as young as 8 to care for the babies and toddlers.

Border Patrol stations are designed to hold people for less than three days, but some children held in Clint and McAllen have been in there for weeks. Legally, migrants under 18 should be moved into Office of Refugee Resettlement care within 72 hours.

But federal officials have said they have hit a breaking point. That's in part because over the last year, migrant children have been staying longer in federal custody than in the past, leading to a shortage of beds in facilities designed for longer-term stays.

Unlike privately contracted child detention centers, Border Patrol stations are federal facilities, exempt from state health and safety standards, according to Texas Department of Health and Human Services spokesman John Reynolds. Child abuse and neglect investigators are not allowed to monitor the stations because they not licensed by the state.

In Clint, Binford said the team found that "little kids are so tired they have been falling asleep on chairs and at the conference table" during conversations with attorneys.

An 8-year-old taking care of a very small 4-year-old with matted hair could not convince the younger child to take a shower, Binford said.

"In my 22 years of doing visits with children in detention I have never heard of this level of inhumanity," said Holly Cooper, who co-directs University of California, Davis' Immigration Law Clinic and represents detained youth.

The lawyers inspected the Border Patrol facilities as part of a Clinton-era legal agreement known as the Flores settlement that governs detention conditions for migrant children and families.

Neha Desai, director of Immigration at the National Center for Youth Law, said the U.S. government, attorneys involved in the Flores settlement and an independent monitor appointed by the judge overseeing the settlement were discussing the situation of children held in McAllen and Clint.

The Clint facility opened in 2013 on a country road not far from the town's water tower, a liquor store and the sandwich shop where Border Patrol agents eat lunch and dinner. The lawyers who negotiated access to the complex said Border Patrol officials knew of their impending visit three weeks in advance.

Customs and Border Protection officials had no immediate comment, but have said for months that the agency is at its breaking point for housing migrants, calling the situation in the El Paso area a humanitarian and security crisis.

In an interview earlier this week with The Associated Press, acting Customs and Border Protection Commissioner John Sanders acknowledged children need better medical care and a place to recover from their illnesses and urged Congress to pass a $4.6 billion emergency funding package that includes nearly $3 billion to care for unaccompanied migrant children.

He said Border Patrol stations are holding 15,000 people -- more than three times their maximum capacity of 4,000.