WASHINGTON (AP) - Karine Jean-Pierre on Wednesday became the first openly gay woman to deliver the White House press briefing and only the second Black woman in history to take on the role.

Jean-Pierre, the White House principal deputy press secretary, had briefed reporters aboard Air Force One, but Wednesday marked her first time before the lectern for a televised briefing.

"It’s a real honor to be standing here today," Jean-Pierre told reporters, when asked about her historic turn. "Clearly the president believes that representation matters, and I appreciate him giving me this opportunity."

Judy Smith, who served as deputy press secretary to President George H.W. Bush in 1991, was the first Black woman to take on the role.

Jean-Pierre is seen as a potential successor to current White House press secretary Jen Psaki, who has publicly said she only intends to serve in the role for about a year, and Wednesday’s appearance was seen as an audition of sorts for the job. Jean-Pierre fields press requests and makes frequent appearances for the Biden administration on cable news.

"Today is a big day in the press office and @WhiteHouse. My partner in truth--@KJP46 is doing her first full briefing from the podium today making history in her own right. But doing her real justice means also recognizing her talent, her brilliance and her wonderful spirit," Psaki tweeted.

On Wednesday, like Psaki and generations of White House spokespeople before her, Jean-Pierre leaned heavily on a binder full of prepared notes and statements, as she fielded questions on topics including the Tokyo Olympics and the origins of the coronavirus pandemic. 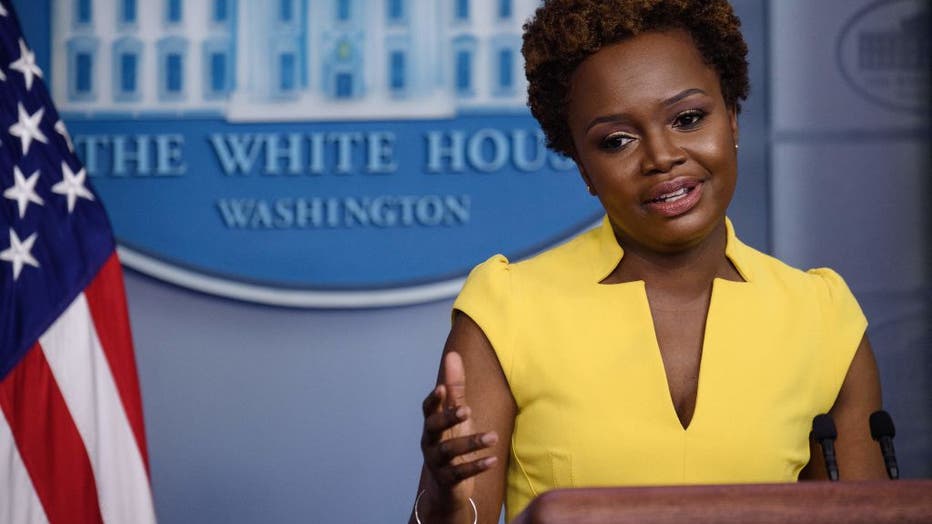 White House Deputy Press Secretary Karine Jean-Pierre speaks during a press briefing in the Brady Briefing Room of the White House in Washington, DC on May 26, 2021.

Jean-Pierre, who was born in Martinique to Haitian emigrants and grew up in New York City, has spoken publicly about how her own experiences as an immigrant have informed her lengthy career in politics.

"I am everything that Donald Trump hates," she said in a video for progressive organization MoveOn in 2018. "I’m a Black woman, I’m gay, I am a mom. Both my parents were born in Haiti."

During the 2020 campaign, Jean-Pierre was now-Vice President Kamala Harris’ chief of staff. She previously worked on both of Barack Obama’s presidential campaigns, ultimately serving as national deputy battleground states director for the 2012 campaign. In between, Jean-Pierre worked in the Obama administration, serving as the White House liaison to the Labor Department and later as regional director in the White House Office of Political Affairs.

Jean-Pierre is one of a handful of potential Psaki successors, a list that includes Symone Sanders, Harris’ chief spokesperson, who has tamped down speculation over her interest in the role. Sanders showed support for Jean-Pierre on Wednesday with a tweet offering her congratulations.

"I will be raising my coffee cup during the WH press briefing in celebration of representation, aptitude and brilliance. The ancestors are proud," she tweeted.