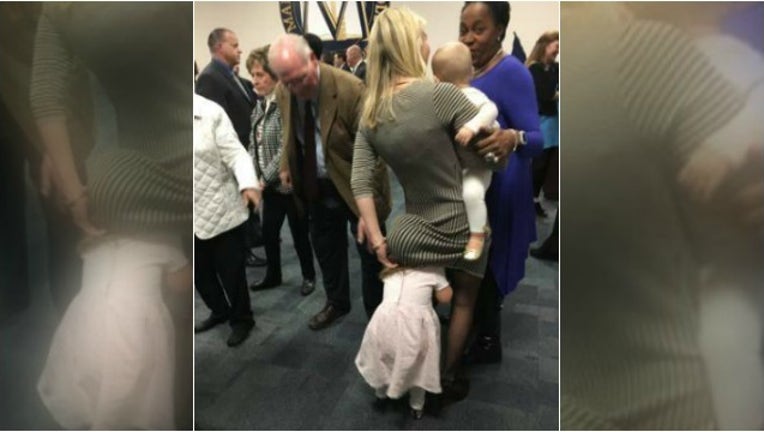 Hobby and her two young daughters, Lauren and Reese, were attending an official swearing-in ceremony for her husband, Dr. Grant Rivera, who took over as superintendent of Marietta City Schools at the beginning of the month.

Moments before Rivera was sworn in, Hobby was holding 1-year-old Reese in her arms, talking with a board member, when Lauren decided she needed her mother's attention. That's when the 3-year-old lifted up the back of Hobby's dress and stuck her head underneath.

Thankfully, the priceless moment was caught on camera.

Hobby told FOX 5 her Star 94.1 co-host Jeff Dauler snapped the photo, which was first shared on the Jeff and Jenn Show's Facebook page.

"I can't even," Hobby joked on Facebook, using the hashtag #parentingforreal.

"I got to see a #parentingforreal moment in person" Dauler said on Facebook. "Thanks for this opportunity, Jenn!"

"We look forward to this new journey," MCS said.

Rivera said on Twitter he's incredibly humbled. He also said he's honored to serve the Marietta community and to have had his family by his side as he took an oath of office.