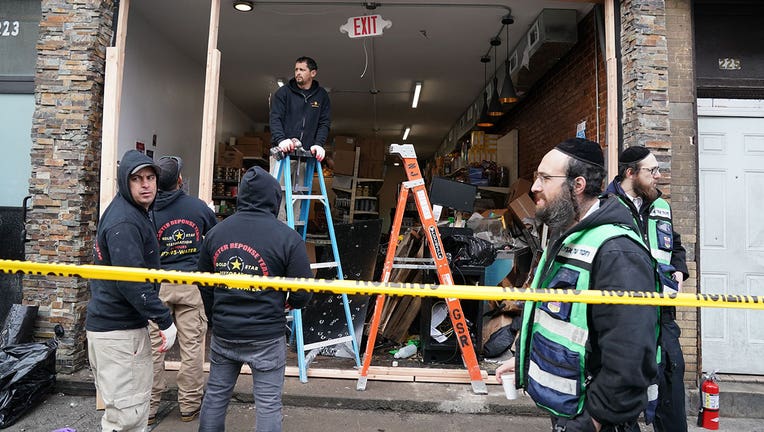 Demolition and recovery crews work at the scene of the December 10, 2019 shooting at a Jewish Deli, on December 11, 2019 in Jersey City, New Jersey. (Photo by BRYAN R. SMITH/Afp/AFP via Getty Images)

JERSEY CITY, N.J. - Investigators were searching for a motive Wednesday into a wild shoot-out between two suspects and police in Jersey City that left one officer, three civilians and the suspects dead, amid growing suspicions the bloodshed was an anti-Semitic attack.

JERSEY CITY, N.J. (AP) — Fears that a deadly shooting at a Jewish market in Jersey City was an anti-Semitic attack mounted on Wednesday as authorities recounted how a man and a woman deliberately pulled up to the place in a rental van with at least one rifle and got out firing.

Ferencz, a mother of three children ages 11, 7 and 4,  and Deutsch, who was shopping inside the store at the time of the shooting, both lived in Williamsburg before moving to Jersey City, according to the United Jewish Organization of Williamsburg and North Brooklyn.

Deutsch is the son of Brooklyn civic leader Abe Deutsch.

The third civilian killed was Miguel Jason Rodriguez, a worker at the store in the Greenville neighborhood,  NorthJersey.com reported.

In a press conference, Attorney General Gurbir Grewal identified the attackers as David N. Anderson, 47, and Francine Graham, 50. Both were found dead at the scene of the attack.

The incident began near a cemetery, where Detective Joseph Seals, a 40-year-old member of a unit devoted to taking illegal guns off the street, was killed by the suspects while trying to stop “bad guys,” Police Chief Michael Kelly said without elaborating.

The killers then drove a stolen rental van over a mile to the kosher market, where they waged a drawn-out battle with police that filled the streets with the sound of high-powered rifle fire and turned the city into what looked like a war zone, with SWAT officers in full tactical gear swarming the neighborhood.

After reviewing CCTV footage, Jersey City Mayor Steven Fulop said it was clear that Anderson and Graham had bypassed other stores and pedestrians and aimed for the deli.

"This did not begin with gunfire between police and the perpetrators. It began with an attack on the civilians in the store.”

The suspects then engaged in a two-hour gun battle with police. Video uploaded to social media showed dozens of officers responding to the scene and the sound of multiple gunshots.

Mayor Steven Fulop says security camera footage shows the two suspects in a wild gunfight with cops targeted the Kosher deli where they were found dead along with three civilians.

"Our officers were under fire for hours," Chief Kelly said.

Police also removed what they described as a possible “incendiary device” from the van the suspects drove to the deli.

Two other police officers were wounded in the gunfire, officials said. They were treated at Jersey City Medical Center and released.  Among them was Newark SWAT Team member Joseph Kerik, son of former NYPD Commissioner Bernard Kerik.

Authorities also said that the two dead killers are prime suspects in the death of a man whose body had been found in a car trunk nearby over the weekend. The victim, identified as Michael Rumberger, 34, of Jersey City, was found with fatal head injuries in the trunk of a Lincoln Town Car on Saturday.

Authorities are investigating potential connections between the attackers and the Black Hebrew Israelite movement, some of whose members are known to rail against whites and Jews, a law enforcement official familiar with the case said. Investigators also are scouring social media postings of at least one of the gunmen in search of a motive, said the official, who spoke on condition of anonymity because the investigation is still going on.

Law enforcement officials have not confirmed that the suspects specifically targeted Jews and City Public Safety Director James Shea said Tuesday there was no indication it was terrorism.

The dramatic scene unfolded in an area that has a Catholic school, a few convenience stores, a hairstylist, a synagogue, and a church.

Bullet holes in the windows of Sacred Hearth Catholic School in Jersey City are a testament to the shattered concept of safety for many in the community. Now, educators are trying to help students cope with the traumatic incident.

30,000 students were locked down in their schools for hours as the situation unfolded. Jersey City school officials worked on a plan to get students home from school hours after their normal dismissal time.

Gov. Phil Murphy said that he was "devastated" by the shooting and paid tribute to the detective who died.

Officials in Jersey City spoke to reporters about the bloodbath that unfolded on Tuesday afternoon. One police officer and several other people were killed.

Here's what we know:

Gunshots rang out in Jersey City on Tuesday. When the violence ended, six people were dead, including a cop and several civilians. Many bystanders posted videos of what unfolded. These are some of the videos that people shared.

Twitter user Keldy Ortiz posted video with the sounds of rapid gunfire. Bursts of gunfire had been going on for around an hour in the city, just across the river from Manhattan.

"They were shooting like crazy about an hour ago."

Andy Patel works at a liquor store about three blocks away from the site of the shooting  and said there had been consistent gunfire.

"I can hear the gunshots. It's like firecrackers going off. They were shooting like crazy about an hour ago. Then it stopped for like 20 or 30 minutes. The cops were clearing everyone off the streets," said Patel.

MLK Drive was also cleared of any pedestrians. Video from the scene showed officers taking aim from a corner while heavily armed police stood outside a school.

In another clip posted online, a long stream of armed officers with weapons pointing in several directions walked down a sidewalk.

Several schools in the area were placed on lockdown and people in all schools in neighboring Bayonne were also ordered to shelter in place.

Authorities also warned people to be vigilant of scam artists trying to take advantage of the tragedy, soliciting donations using fraudulent fundraising appeals for the victims.

The federal Bureau of Alcohol, Tobacco, Firearms and Explosives said its agents responded to the scene to help in the investigation. Several other law enforcement agencies also responded.

The New York Police Department sent emergency services personnel to Jersey City, and its counterterrorism unit was monitoring the situation, although terrorism was not believed to be connected to the situation.

Police moved in to a Jersey City neighborhood on Tuesday afternoon to try to capture a man who opened fire.