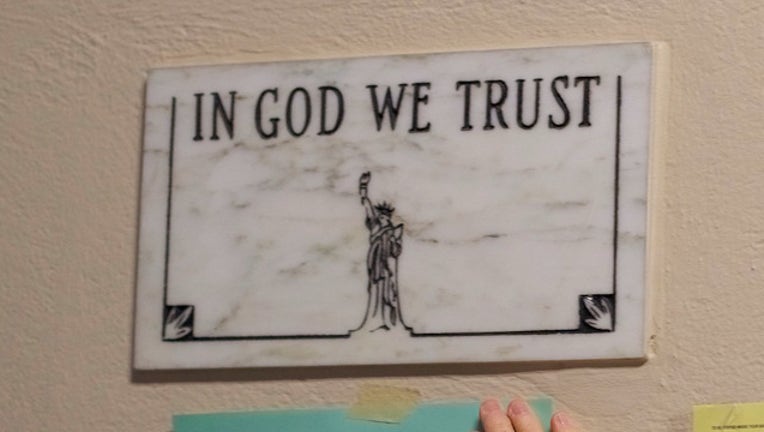 RAPID CITY, S.D. (AP) - When students return to public schools across South Dakota this fall, they should expect to see a new message on display: “In God We Trust.”

A new state law that took effect this month requires all public schools in the state’s 149 districts to paint, stencil or otherwise prominently display the national motto.

The South Dakota lawmakers who proposed the law said the requirement was meant to inspire patriotism in the state’s public schools. Displays must be at least 12-by-12 inches and must be approved by the school’s principal, according to the law.

“Some have plaques. Other have it painted on the wall, maybe in a mural setting,” Pogany said. In one school “it was within their freedom wall. They added that to a patriotic theme.”

The Freedom From Religion Foundation, based in Madison, Wisconsin, which has legally challenged the motto’s inclusion on U.S. currency, alerted its South Dakota members to contact their legislators to express opposition to the law.

“Our position is that it’s a terrible violation of freedom of conscience to inflict a godly message on a captive audience of school children,” foundation co-president Annie Laurie Gaylor said Wednesday.

Pogany said the school boards’ association was OK with the legislation as long as it provided legal protection.

“One of our concerns was that this would be contested. So we had asked the legislature to put a ‘hold harmless’ clause into the bill. The state would then defend the schools and pay the cost of the defense,” Pogany said.

In May, a group of students from the district’s Stevens High School suggested to the school board an alternate version of the motto they designed that includes the names of Buddha, Yahweh and Allah — as well as terms likes science and the spirits. The student group Working to Initiate Societal Equality, or WISE, told board members that the standard motto appears to favor Christianity over other religions.

“To my knowledge there’s been no discussion among the board about any alternative,” Urban said.

“In God We Trust” was adopted when President Dwight D. Eisenhower signed legislation in 1956. According to the U.S. Department of Treasury website it first appeared on paper money the following year.