GLENDALE, Calif. - IHOP announced Thursday it would be reviving its effort to launch flip’d by IHOP — a new chain of kiosks that focus on takeout and delivery services.

The pancake chain had previously announced plans for flip’d in 2019 with the pilot location slated to open in Atlanta last year. IHOP president Jay Johns told FOX Business consumers indicated many of their fast-food breakfast options were "coffee forward," rather than being "food forward."

IHOP planned to insert itself into that lane last year with flip’d. But much like the rest of life in 2020, those plans were disrupted by the COVID-19 pandemic.

"Since we originally announced flip’d in 2019, a lot has changed. We wanted to ensure that we were evolving the concept to meet our guests’ needs," Johns in a news release.

Johns recognizes the pandemic has left consumers with "a pent-up demand for a return to dining in restaurants." But he anticipates the demand for a delivery and takeout business remaining strong, especially during the morning commute.

"With flip’d, we can provide that on-the-go fast casual experience, making now the perfect time to bring this concept into the world," Johns said. 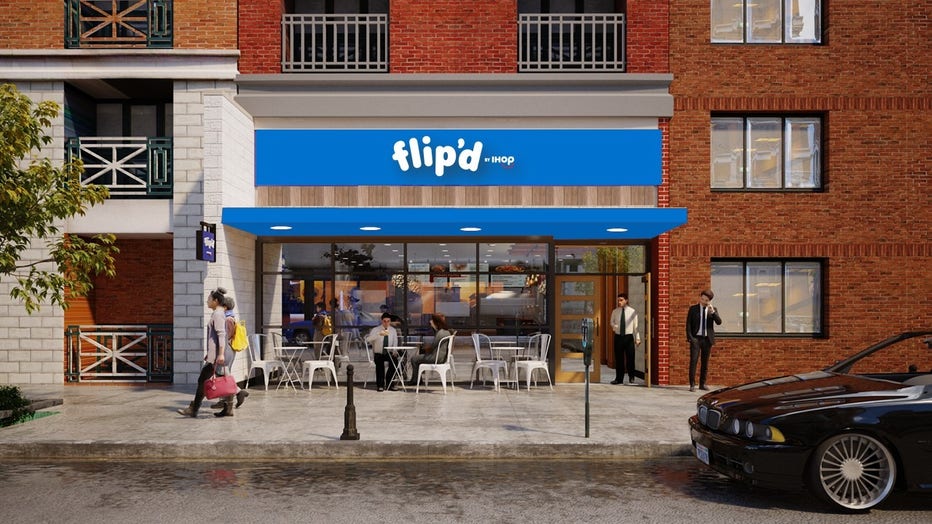 The initial plans were for flip’d to be placed in large metropolitan cities, but IHOP has since expanded that vision to include suburban and non-traditional venues. (Source: IHOP)

Instead of ordering from a dining room table, flip’d will encourage customers to order on phones or the kiosks in stores. And they will be able to choose from options inspired by IHOP favorites, like pancake bowls and egg sandwiches.

The menu will also include non-breakfast items like burritos, sandwiches and salads.

The first location is no longer slated to open in Atlanta. New York City has taken that honor and it will open sometime this summer.

The initial plans were for flip’d to be placed in large metropolitan cities, but IHOP has since expanded that vision to include suburban and non-traditional venues.

"Even though the footprints of these initial flip’d locations will vary during this pilot phase, what will remain consistent is our emphasis on quality, speed, to-go and delivery, all with the crave-worthy food that has been a hallmark of the IHOP brand for more than six decades," Johns said.