A doctor helps a Buford family stay connected as one of their own battles the coronavirus.

ATLANTA - There is a lot Stuart Hall of Buford, Georgia, cannot remember about his brush with COVID-19.

Yet, for everyone involved, Hall's story is one they will never forget.

He fell sick in late March, ending up in the emergency room, only to be sent home to quarantine.

Kellee Hall spent the next two weeks tracking her husband’s temperature and breathing, checking in with his doctor. 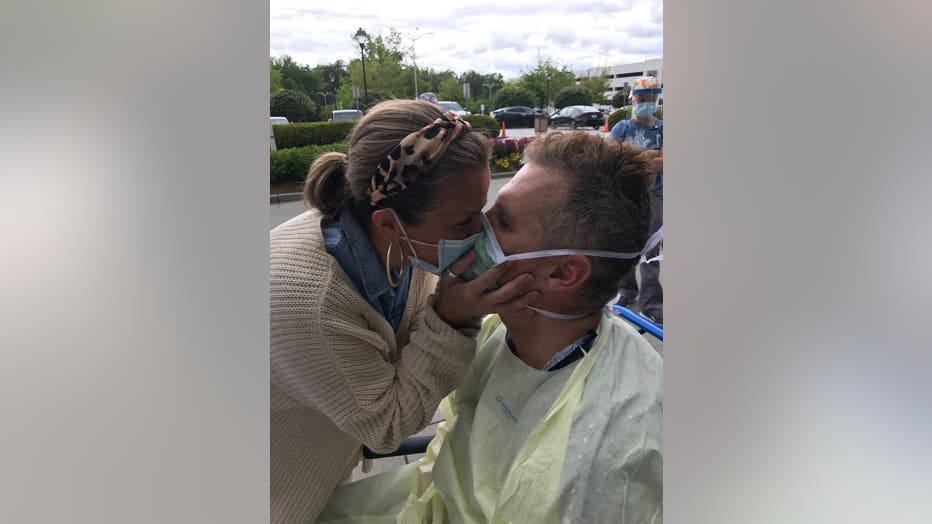 A blood clot, likely triggered by the virus, had cut off part of the blood flow to his heart, triggering a heart attack.

Kellee Hall rushed her husband back to Northside Hospital Forsyth, where the news was grim.

"I could tell the cardiologist that I talked to that night really wanted to give me a hug, and cry with me," Kellee remembers.  "Because he really gave me no hope, when I walked out of there."

She and the couple’s children spent the night pacing the hospital parking lot, praying for Stuart.

"This was a very sick patient," Dr. Sayed says.

He was already in a medically-induced coma, breathing on a mechanical ventilator when Dr. Sayed went into his room.

She asked the nurse about Hall’s family, then called Kellee in the parking lot.

"It was heartbreaking," Dr. Sayed says.  "You put yourself in that situation.  I'm married. That could be my husband."

For the next 25 days, while Stuart Hall fought for his life, Dr. Sayed worked to keep his family connected to him.

"She was just a godsend for us," Kellee Hall says.

She would bring an iPad into his room to allow Kellee to see her husband.

A nurse hung a big blue heart in Stuart's window.

"We had so many family and friends coming to the parking lot, just wanting to pray with me, pray for me," Stuart Hall says.

"It was a way of knowing, there he is," his wife says.

Stuart came off the ventilator, briefly, only to have a setback and be quickly intubated again.

On the good days, Dr. Sayed couldn't wait to call Kellee and give her an update.

"Then, when we had setbacks, I dreaded to make that phone call," Sayed says.  "Because I could hear on the other end how Kelly sounded, and she was in despair, 'We're praying.  We need him home.' And I said, 'I understand.  We're doing everything.'"

Stuart Hall would later learn just how close he came to not surviving.

"There was a point where 6 or 7 doctors were standing around my body, and looking at each other, going, 'What do we do, because he's dying," Hall says.  "And this kidney doctor said, 'Let's try plasma exchange.'"

With his wife’s permission, Stuart Hall was given two transfusions of plasma collected from a COVID-19 survivor.

It was a turning point, he says.

"By every account, within 24 hours, I was a totally different person," he says.  "And they did that twice. They were supposed to do it three times, but my body responded so well."

When Hall finally came off the ventilator for the last time, he confused and agitated.

"I said, 'I know you've been asking if you can come in and see him, and every time we tell you no, but I think what he needs is right now is you, even if it is just for a few minutes,'" Sayed recalls.

They dressed Kellee in full protective gear, after receiving the go-ahead from the hospital’s administration.

"Then, he saw me outside in the hallway, and I'm jumping up and down," she laughs.

"Stuart said to the nurse, I think I'm hallucinating because I see someone who looks like my wife outside the window,'" Dr. Sayed says.

They had about an hour together.

They hadn't seen each other in three weeks.

"We were both so emotional," Stuart Hall says.  "That's hard for me to talk about."

A few days later, outside for the first time in about a month, Stuart Hall was reunited with their kids.

"I think, more than anything else, it gave them a sense of hope, that dad is going to be okay," Kellee Hall says.   "And, that's what he told them, after the crying and hugging and everything.  He sat them down and said, 'I want you to look at me and know that I am okay. I am gonna be okay.'"

He credits the Northside Forsyth ICU team with helping him survive the virus.

"I think what I learned from Stuart is resilience," Dr. Sayed says.  "He had a great team, who worked hard to bring him home, and that's what we did."