TEMPE, Ariz. - A woman who crashed into a suspected drunk driver and potentially saved the lives of a couple crossing the street received a new set of wheels.

Startling video of the crash near 53rd Avenue and Indian School Road was released by Phoenix Police earlier this month. Officers arrested the driver that ran the red light.

Phoenix Police released a video of a car possibly saving the lives of a couple crossing the street as it crashed into a suspected drunk driver running a red light.

The people at Carvana saw that heart-stopping video and wanted to do something nice for the driver they call a hero, so they gifted her with a new 2018 Chevy Cruz.

Shannon Vivar says she doesn't remember the moment when the car she was driving with her mom and young son took the brunt of the impact from a vehicle running a red light, which in turn saved a couple who was crossing the street. She says she was in the right place at the right time.

"It just happened so quickly, I think it was all meant to happen that way," said Shannon Vivar. "Something was telling me to just hold on a little bit, you know?"

While Shannon calls it divine intervention, the people at Carvana call her a hero and wanted to do something special for her.

"When we heard about this, we recognized her as a community hero and when you watch the video it's so compelling we wanted to reach out to this woman and thank her for this remarkable action," said Teresa Aragon with Carvana.

So they gave her a new car!

"I've been having a hard time coping with everything and this makes me feel really good," said Shannon. "I've cried, I've never actually had anything like this happen to me so it was really really new to me." 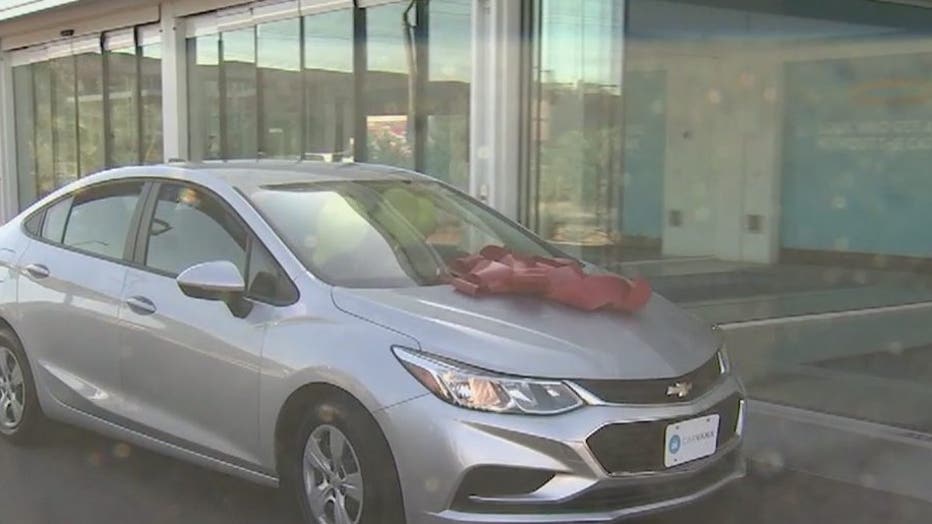 Not only did Shannon get that new car, but Carvana also threw in some swag, including a new car seat for as son as well as a family pack to Disneyland.