A positivity rate at or below 5 percent is the benchmark for containing the coronavirus, according to the World Health Organization.

ATLANTA - There is a lot of coronavirus information to sort through on the Georgia Department of Public Health daily status report, published on dph.georgia.gov

To get a gauge of how your county is doing, microbiologist Dr. Amber Schmidtke, Ph.D., recommends going to the interactive Georgia map on the site and focusing on two things, the positivity rate and the average number of cases per 100,000 for the last two weeks.

"You can click, or hover over your county and get a lot of interesting information from that," she says.

As of Friday, Georgia's statewide positivity rate was 5.8%.

Schmidtke recommends focusing in on your county's numbers.

"What's happening in your county is going to be more important to you than what's happening across the state, because those are the folks that are more likely to infect you," Schmidtke explains. 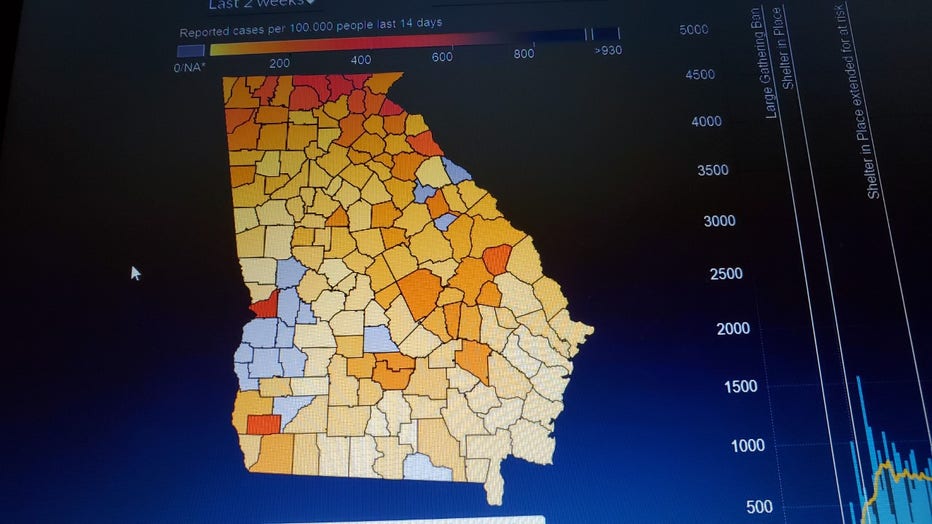 The positivity rate indicates what percentage of tests have come back positive for COVID-19 of all the tests performed.

"The World Health Organization has a goal set for us of being at or below 5% for a sustained period of time, as sort of a good benchmark towards being on the path towards containing the virus," Schmidtke explains.  "So, that's where we want to be."

As of Friday, several counties in the Metro Atlanta area were below that 5% threshold, including Fulton, DeKalb, and Cobb counties, which all had an average positivity rate of 3.5% for the last two weeks.

The other important number to look at, Schmidtke says is the average case count per 100,000.

Your county's case per 100,000 average, Schmidtke says, will give you the current case rate adjusted for the population of your county.

"Ten (new) cases in Fulton County is not going to be as big a deal as 10 cases in Glascock County," she says.

"But, for right now, we have several counties, the White House Coronavirus Task Force counts them as the "red" counties, and that means they have over 100 cases per 100,000. So, that's what they consider to be cause for concern."

Schmidtke recommends focusing on trends, paying attention to what is happening with the numbers over a one-week or two-week period, rather than on the daily numbers.

Lab testing slows down over the weekends, and there can be a lull in daily case numbers and then a big jump as the week begins.

Tracking two-week averages, she says, will give you the best idea of whether your county is trending in the right direction.