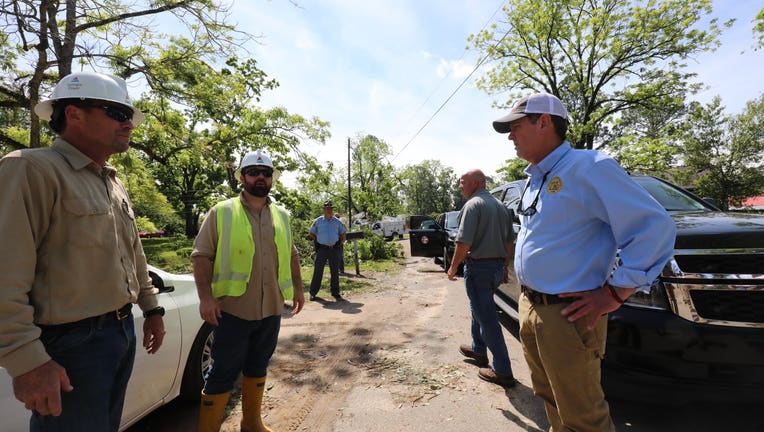 Gov. Brian Kemp tweeted this photo showing him tour the damage in south Georgia a day after storms moved through the state on April 23, 2020. (Governor Brian Kemp / Twitter)

Kemp was to fly to Pelham on Friday morning to assess damage in that community and the surrounding area, according to a schedule provided by his office. He then planned to visit Adel later in the day.

The storm system tore through the South on Thursday, killing at least seven people in Oklahoma, Texas and Louisiana.

In Georgia, a suspected tornado swept through Adel, tearing off roofs and flipping at least one car and a small plane. The tornado struck about a block from the offices of The Adel News-Tribune, said Maria Hardman, the newspaper’s general manager.

The damage was caused by a combination of straight-line winds and the tornado, said Wright Dobbs, a meteorologist with the National Weather Service’s Tallahassee, Florida, office.

There were no reports of injuries or deaths in Georgia. 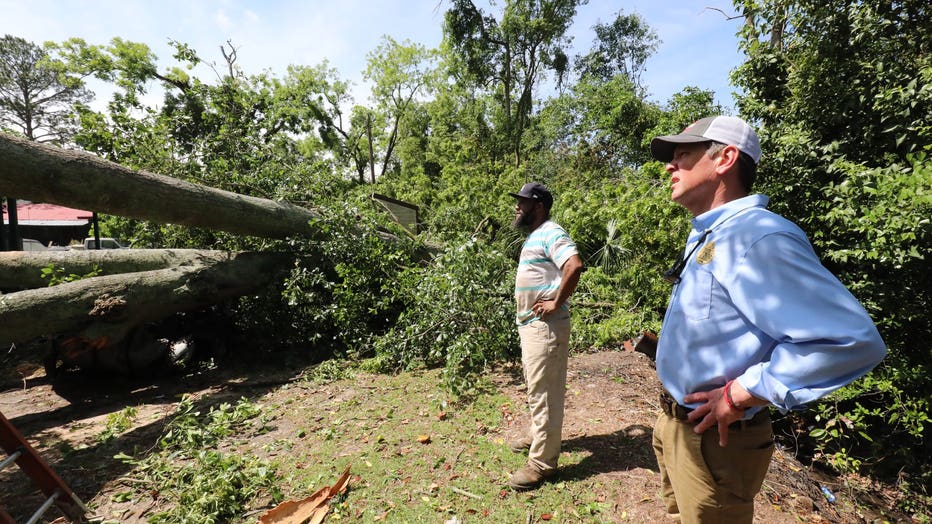 Gov. Brian Kemp asks the public to continue to pray for communities in south Georgia after touring some of the hardest hit areas on April 24, 2020. (Governor Brian Kemp / Twitter)

In Anniston, Alabama, a firefighter and an emergency medical worker were injured when part of a tree fell atop them while they were rescuing a person who was trapped inside a home by a tree that fell during a storm, Anniston EMS said in a statement posted on its Facebook page. The workers and the resident were all taken to a hospital, but none of the injuries was life-threatening, the agency said.

SEE ALSO: At least 7 dead as storms tear through the South

In Louisiana, a man was later found dead after a witness saw him try to retrieve a trash can from water near a drainage ditch; He lost his footing and was swept away by floodwaters, DeSoto Parish Sheriff Jayson Richardson told The Shreveport Times.