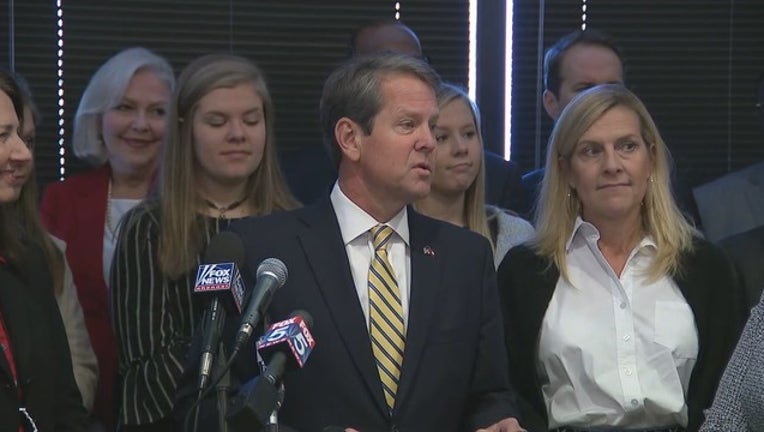 AUGUSTA, Ga. (AP) - After a contentious race that drew national attention, Georgia's soon-to-be governor said Wednesday rural job growth and cracking down on violent gangs will be among his top priorities for the year as he kicked off a victory lap across the state in advance of next week's inauguration.

Republican Gov.-elect Brian Kemp gave a glimpse of his 2019 agenda after mingling with dozens of supporters in Augusta, the first stop on what Kemp called a "thank you tour" of nine cities that will keep him on the road through Saturday. The big celebration will be Monday, when Kemp gets sworn in as Georgia's 83rd governor.

"Putting Georgians first, working for hard-working Georgians, that wasn't just a campaign slogan," Kemp told the crowd at a banquet hall across from Augusta National Golf Club, where the famed Masters tournament is played. "It is going to be the way that we govern."

In November, Kemp won a bitterly divisive race against Democrat Stacey Abrams, whose campaign to become the first black female governor in the U.S. drew attention far beyond the Southern state. Abrams and others criticized Kemp for overseeing his own gubernatorial election as Georgia's secretary of state and accused him of enforcing policies that suppressed turnout among minorities and poor voters. Kemp staunchly denied wrongdoing.

Kemp never mentioned Abrams during brief remarks in Augusta that revisited broad themes from the campaign regarding economic growth and crime.

"We're going to work hard every day to make Georgia No. 1 for small business," Kemp said. "We're going to reform state government so we can continue to budget conservatively and spend money on our priorities, and that includes lowering taxes. We're going to strengthen rural Georgia."

He also singled out violent gangs and drug cartels as a priority. Kemp said he's attended two funerals for police officers killed in the line of duty since winning the November election, and called their deaths "outrageous."

"As a father, nothing worries me, bothers me or makes me madder than people shooting our own families up as well as our police officers," Kemp said.

Kemp later told reporters the priorities he highlighted are "bipartisan issues" that will be his focus during the 40-day session of the Georgia legislature that begins Monday.

He declined to give more specifics about his legislative agenda.

"I'm going to be talking about a lot of things I'm going to do legislatively when we get ready to talk about them," Kemp told reporters.