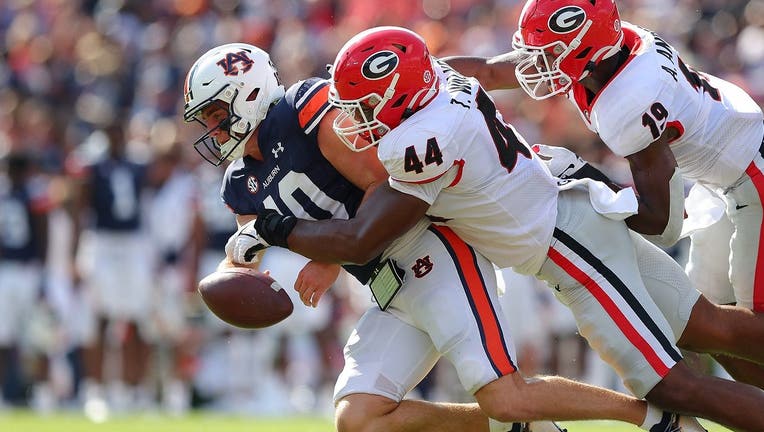 Bo Nix #10 of the Auburn Tigers fumbles the ball as he is tackled by Travon Walker #44 and Adam Anderson #19 of the Georgia Bulldogs during the first half at Jordan-Hare Stadium on October 09, 2021 in Auburn, Alabama . After a review, the play was ov

Georgia has gone 6-0 for the season in the Deep South’s Oldest Rivalry. The Bulldogs beat Auburn 34-10.

The second-ranked Bulldogs fresh from two straight league shutouts and virtually unscathed defensively this season, visited Bo Nix and the No. 18 Tigers on Saturday afternoon.

Stetson Bennett passed for 231 yards and two touchdowns and led No. 2 Georgia past No. 18 Auburn for the second straight year in a 34-10 victory Saturday.

The nation’s top defense gave up only its second touchdown of the year for the Bulldogs (6-0, 4-0 Southeastern Conference), who were still without injured starting quarterback JT Daniels. None of that kept Georgia from another comfortable SEC win and a fifth straight in the Deep South’s Oldest Rivalry.

Bennett, who made his first college start in a Top 10 matchup with Auburn (3-2, 1-1) last season, completed 14 of 21 passes and hit Ladd McConkey in stride for a 60-yard third quarter score. He also had a 30-yard run.

Daniels is out with a lat injury for the second straight week.

Zamir White ran for 79 yards on 18 carries with two touchdowns, doing most of his damage in the second half.

Bo Nix and the Tigers came in averaging 40 points per game but couldn’t solve the Georgia defensive puzzle despite moving the ball at times. Nix completed 21 of 38 passes for 217 yards with an interception off a dropped ball a week after delivering a comeback win at LSU.

Georgia also sacked him four times and harried him all afternoon, and the Tigers had some other drops to boot. The Bulldogs allowed just 46 yards on 29 rushes.

Auburn had failed fourth-down passes end its final drive of the first half and its opening one in the second.

It’s only the second time since 1936 the two teams have met outside of November. The Bulldogs won on Oct. 3 last year in the second game of a season shortened by the pandemic. Auburn pushed for the move to avoid facing its two biggest rivals — and the current SEC powers — Georgia and Alabama to end each regular season.

The Bulldogs already have played two games away from Athens, but the visit to Auburn will be different. This will be the first game this season the Georgia fans will be outnumbered. Georgia red dominated the stands in their 62-0 win at Vanderbilt on Sept. 25. The opener against Clemson was played at a neutral site in Charlotte, North Carolina.

Georgia: The nation’s best defense mostly dominated, chasing Nix around the backfield and stuffing the run. Still looks like a team on its way to the SEC championship game.

Auburn: Showed it still has a long way to go to catch the SEC powers. The tone was set with an opening drive that stalled just shy of the end zone — and another one that did the same just before the half. The bright spot: Both losses have been to Top 10 opponents.

Auburn safety Smoke Monday was called for targeting against Georgia for the second straight year. This one was for a head-on hit on a scrambling Bennett on the opening play of the second quarter near the goal line. He missed the second half of both games.

UP NEXT Georgia hosts No. 16 Kentucky, which entered the weekend as the only other unbeaten SEC East team.