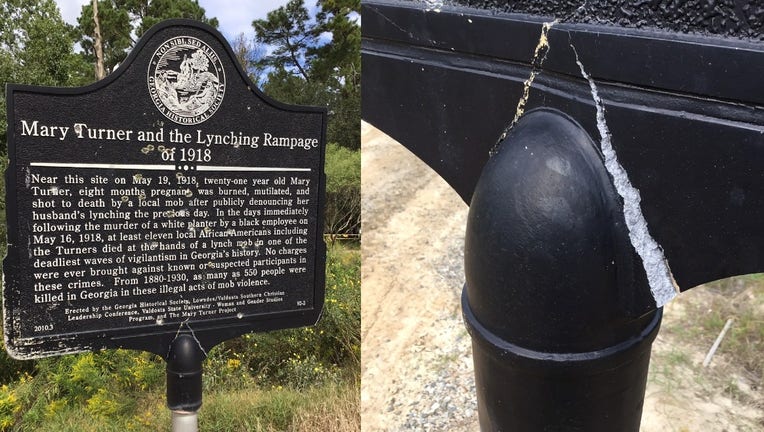 HAHIRA, Ga. - A Georgia historical marker at the spot of a gruesome lynching has been removed after a new round of vandalism, officials said.

The removal of the Mary Turner and the Lynching Rampage marker last week was announced Sunday by The Mary Turner Project. Its coordinator, Mark Patrick George said the marker had been shot at and hit several times by an “off road vehicle.”

George said the group and the Georgia Historical Society decided to remove the marker before it was completely broken off. The sign will be stored away while plans to reinstall it are developed.

The marker, dedicated to the 13 victims of lynching in Lowndes and Brooks counties in May 1918, which it describes as “one of the deadliest waves of vigilantism in Georgia’s history,” has been vandalized before. In 2018, the sign was riddled with bullet holes for the second time in five years.

It’s unclear whether authorities are trying to find the vandals. Representatives of both sheriff’s offices said Monday that they had no information to share about an investigation.

Mary Turner was 21 years old and eight months pregnant when she raised an outcry over the lynching of her husband, Hayes Turner. A mob seeking retribution for the killing of a white farmer by another man strung her up by her heels.

The marker’s text reads, in part: “Near this site on May 19, 1918, twenty-one year old Mary Turner, eight months pregnant, was burned, mutilated, and shot to death by a local mob after publicly denouncing her husband’s lynching the previous day.”

“No charges were ever brought against known or suspected participants in these crimes. From 1880-1930, as many as 550 people were killed in Georgia in these illegal acts of mob violence,” the marker reads.