On Saturday, election workers continued to count millions of ballots as a part of a statewide audit.

ATLANTA - Masked election workers across Georgia are continuing the recount by hand of nearly 5 million votes across the state for the 2020 presidential election.

The law requires that one race be audited to check that new election machines counted the ballots accurately, not because of any suspected problems with the results. Secretary of State Brad Raffensperger chose to audit the presidential race and said the tight margin — Democrat Joe Biden leads Republican President Donald Trump by roughly 14,000 votes — meaning a full hand count was necessary.

Gwinnett County held a short training session with staff before beginning to count in earnest around 10 a.m. Friday. 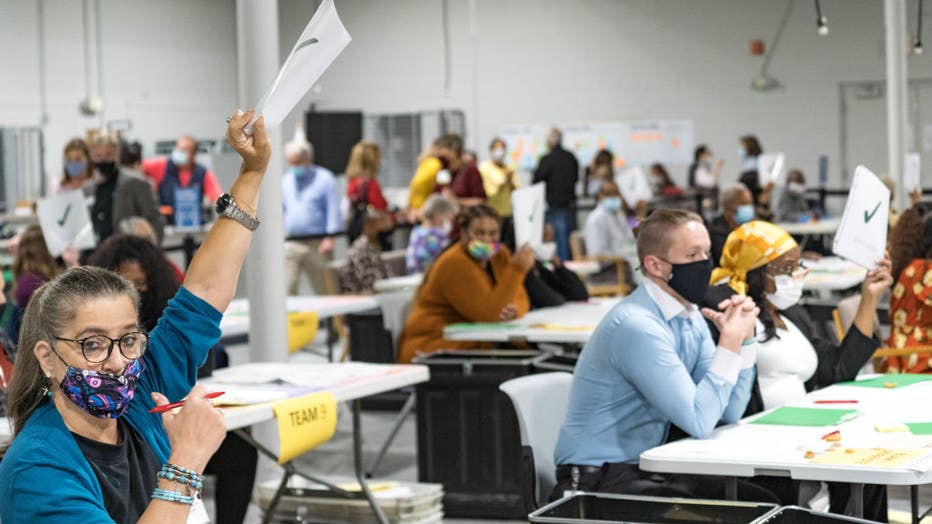 Gwinnett County workers begin their recount of the ballots in Lawrenceville, Georgia.

"I think the biggest challenge is this is the first time that any of us have done this--not just Gwinnett, but any county in Georgia," said Joe Sorenson, communications director for Gwinnett County. "So, we really don't know what to expect, but what we've all learned is that we will adapt and we will figure out how to make this happen and get this to work."

The county started the process with 64 "audit boards," which are made up of two people each. Working one batch of ballots at a time, both people on an audit board must confirm the presidential selection on each ballot before sorting it into a stack for either Donald Trump, Joe Biden, Joe Jorgensen, or another candidate.

If an audit board cannot agree on a voter's choice, they set that ballot aside for a bipartisan vote review panel to make a determination.

Once they are done with a batch, the audit board tallies up all the votes for each candidate and reseals the ballot box.

Gwinnett County had more than 400,000 votes in the presidential race to recount. Cobb County had about 393,000.

At the Chatham County board of elections annex, a cavernous warehouse on the south side of Savannah, about 60 auditors wearing face masks listened as a supervisor ran through how the process would work, then watched a training video before beginning the count a little after 10 a.m.

At the Floyd County administration building in Rome, in north Georgia, pairs of masked auditors sitting at eight plastic folding tables were sworn in at 9 a.m. and the ballots arrived a few minutes later.

The audit of this past election has begun in Georgia.

Some counties used Friday to set up before beginning their counts Saturday.

In Fulton County, the state’s most populous, a 110,000-square-foot space at the Georgia World Congress Center in downtown Atlanta was being prepared for 125 two-person teams, elections director Rick Barron said during a video news conference.

The county elections department has been hard hit by the coronavirus. Two people in the absentee ballot section were infected in the spring, before the primary election, including one who died. An additional 26 workers in a warehouse where election equipment is prepared and supplies are stored tested positive last month.

That was on their mind as they planned the space for the audit, Barron said.

Counties are solely responsible for performing and paying for the audit.

MORE: For the first time ever the Carter Center will monitor an American election

The secretary of state’s office has instructed county election officials to complete the audit by 11:59 p.m. Wednesday.  The deadline for the state to certify the results is Nov. 20.

Even as the count began, Raffensperger was self-quarantining as a precaution after his wife tested positive Thursday for the coronavirus. Deputy Secretary of State Jordan Fuchs said that Raffensperger tested negative for the virus and said the secretary’s quarantine will not affect the audit.

The audit is part of a 2019 law that also set out guidelines for the purchase of a new $100 million election system from Dominion Voting Systems. It was up to the secretary of state to choose the race and Raffensperger said the presidential race made the most sense because of its tight margin and national significance.

But critics have accused him of caving to Trump after the president’s campaign and state Republicans requested a hand recount. Raffensperger’s office has strongly denied that.

Critics have also argued that a full hand recount was not intended under Georgia’s audit requirement and imposes an unnecessarily heavy and expensive burden on county election officials.

The final numbers in the audit count will almost certainly differ from the numbers previously reported by the counties, but the overall outcome should remain the same, said Gabriel Sterling, who oversaw the implementation of the state’s new voting system for the secretary of state’s office.

The results will not be released piecemeal as the counties finish counting but will be announced once the full tally is complete, he said, adding that the result of the audit is what will be certified.