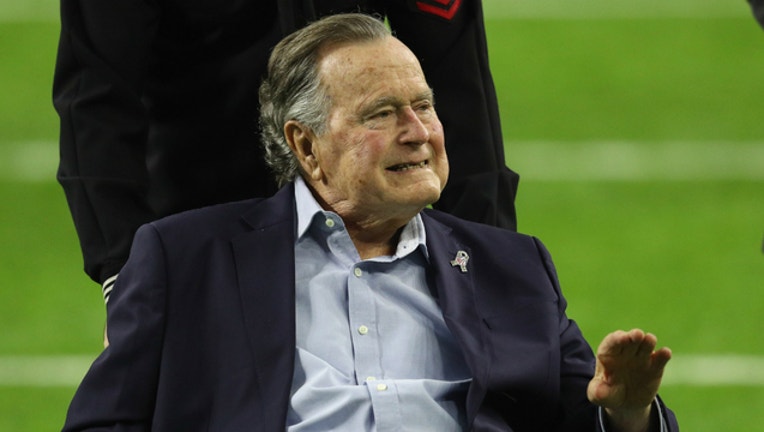 President George H.W. Bush arrives for the coin toss prior to Super Bowl 51 between the Atlanta Falcons and the New England Patriots at NRG Stadium on February 5, 2017 in Houston, Texas. (Photo by Patrick Smith/Getty Images)

WASHINGTON - Former President George H.W. Bush will lie in state in the Capitol Rotunda next week.

The 41st president died late Friday, less than a year after the passing of his wife of 73 years, former first lady Barbara Bush.

The leaders of Congress from both parties say an arrival ceremony will be held for the former president on Monday at 5 p.m. EST.

His casket will be transported by motorcade Wednesday morning to the National Cathedral, where a state funeral will be held at 11 a.m. EST. President Donald Trump, who ordered federal offices closed on Wednesday for a national day of mourning, is to attend with first lady Melania Trump.

Air Force One is being sent to Texas to transport Bush's casket to Washington, where his body will lay in state at the Capitol Rotunda after an arrival ceremony Monday. The public is invited and can pay their respects from Monday evening through Wednesday morning.