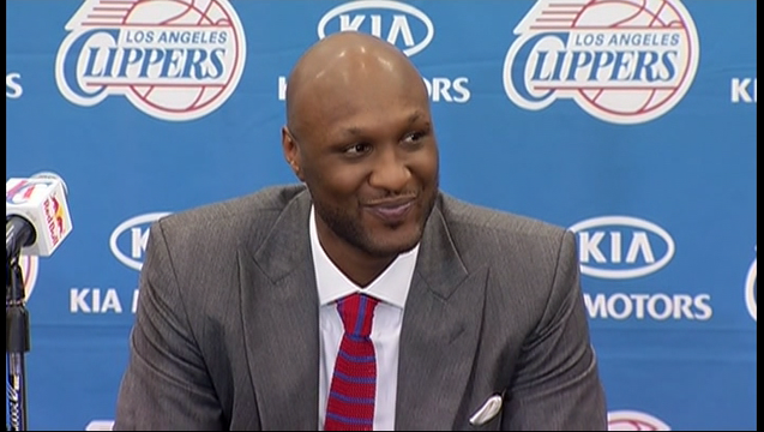 UPDATE: According to TMZ, Lamar Odom is still in a coma and his heart is failing. A TMZ source says he's having serious problems with his kidneys and lungs as well and Khloe Kardashian is by his side.

The former Los Angeles Laker and member-by-marriage of the Kardashian family was in a Las Vegas hospital Tuesday night and there was no immediate word on his condition, officials said.

The Nye County Sheriff's Department was called at about 3:15 p.m. Tuesday to Love Ranch in Crystal, Nevada, about 70 miles outside of Las Vegas for a report of an unresponsive man needing an ambulance, Sheriff Sharon A. Wehrly said in a statement.

The 35-year-old was stabilized and taken to Desert View Hospital in nearby Pahrump, the statement said. Officials then tried to have him airlifted to Las Vegas, but the 6-foot-10-inch Odom was too tall for the helicopter that was available and he was driven by ambulance to Sunrise Hospital and Medical Center.

Dennis Hof, who owns the Love Ranch and other legal brothels in Nevada, said his staff had picked up Odom from a home in Las Vegas on Saturday.

"He just wanted to get away, have a good time and relax," Hof told The Associated Press in a phone interview.

Hof said Odom was "happy, he was sleeping every night," while visiting, but two women went to check on Odom Tuesday afternoon after not hearing from him since early morning, and found him face down and unconscious.

When they turned him on his side at the direction of a 911 operator, Odom started "throwing up all kinds of stuff."

Hof said Odom had been taking herbal Viagra and had drunk part of a bottle of cognac since arriving, but had no knowledge of his use of any other drugs.

"It's incredibly sad," said Hof, who turns 69 on Wednesday. Hof is known for his own onetime reality show, "Cathouse," on HBO.

Odom, who won two NBA championships with the Lakers in 2009 and 2010, last played in the NBA in 2013, and saw recent reality TV fame through his marriage to Khloe Kardashian.

Kardashian filed for divorce in 2013, citing irreconcilable differences. The divorce has not yet received final approval from a judge.

The two were married in 2009 in a large ceremony that was taped for the E! network, following a whirlwind engagement that was also filmed.

The Lakers played an exhibition game in Las Vegas on Tuesday night, losing 107-100 to Sacramento. Kobe Bryant and Metta World Peace are Odom's only remaining teammates on the roster.

World Peace clearly was distraught about Odom's health after the game.

"There's not one word I could say that would make sense," World Peace told reporters, declining further comment.

Bryant left the arena without speaking to reporters.

Odom spent the best years of his career with the Lakers, winning two championship rings and the NBA's Sixth Man of the Year award in 2011.

After seven years in purple and gold, he was crushed in December 2011 when the Lakers attempted to trade him to New Orleans in a multiplayer trade for Chris Paul. He eventually went to Dallas in another deal, but was out of the NBA just two years later.

Some troubles that met Odom before and during his career appeared to worsen after he left the league, and included a no-contest plea to drunken driving shortly before his divorce.

Odom was suspended during the 2000-01 season for violating the NBA's anti-drug policy for the second time in eight months. During the 2010-11 season, a cousin he was close to died and Odom was a passenger in a vehicle involved in an accident in New York that killed a cyclist.

Odom played one season at Rhode Island before being drafted in the first round with the No. 4 overall pick by the Clippers in the 1999 NBA draft.

Born Lamar Joseph Odom on Nov. 6, 1979, in New York City, he was raised by his grandmother after his mother died of cancer when he was 12. His father was a drug addict.

In 2006, Odom's 6-month-old son Jayden died from SIDS while sleeping in his crib in New York.

He has a daughter, Destiny, and a son Lamar Jr., from a previous relationship.