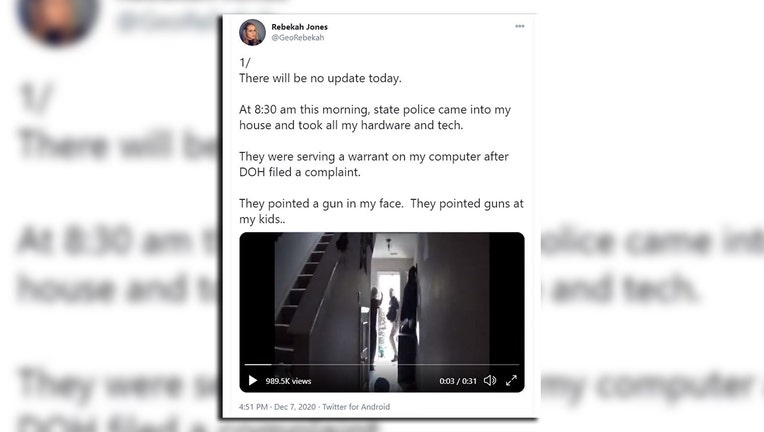 TAMPA, Fla. - The data scientist who built the Florida Department of Health COVID-19 dashboard, but was removed from her job in May due to "insubordination," says state police officers seized "hardware and tech" from her home and pointed guns at her and her children.

After leaving her job with the state, Rebekah Jones launched her own website which closely resembled the state's COVID-19 dashboard. At the time, Jones said she believed she was fired for refusing to alter state data for the website.

In a series of tweets Monday, Jones posted a video which she says shows officers coming into her home with guns drawn.

In the video, a woman, presumably Jones, opens a locked door and a man wearing a black vest pulls her outside by the arm. Another man wearing a vest comes through the doorway and pulls out a gun.

Another man comes in with his gun drawn and points it upward toward a staircase.

Jones: You want the children down?
Officer: Call them all down.

At least five officers with guns and wearing vests can be seen entering the home.

As another officer speaks inaudibly to Jones, other officers can be heard yelling up the stairs.

Officer: Police. Come down now, search warrant!
Jones: He just pointed a gun at my children!

In another tweet, Jones said officers took her phone and the computer she uses "to post the [COVID-19] case numbers in Florida, and school cases for the entire country."

She said the officers also "took evidence of corruption at the state level."

The Florida Department of Law Enforcement said Monday night that officers were serving a search warrant related to the alleged hack of a state emergency alert system.

In a written statement, FDLE Commissioner Rick Swearingen said agents announced themselves to Jones by phone and at the door "for 20 minutes" before Jones opened the door.

"After several attempts, Ms. Jones allowed agents inside.  Agents entered the home in accordance with normal protocols and seized several devices that will be forensically analyzed. At no time were weapons pointed at anyone in the home. Any evidence will be referred to the State Attorney for prosecution as appropriate," Swearingen's statement said.

According to the search warrant related to the incident, agents were investigating a message sent to about 1,750 state employees through a system used to "coordinate the state's health and medical resources, capabilities, and capacities."

The message sent through the system said, "it's time to speak up before another 17,000 people are dead. You know this is wrong. You don't have to be part of this. Be a hero. Speak out before it's too late."

The search warrant said that all users of the messaging system who are assigned to the group that received the Nov. 10 message share the same username and password, however, the state says its investigation found that the IP address used to log in using the shared username and password was connected to Jones' address.

FOX 13 News has reached out to Rebekah Jones for comment.