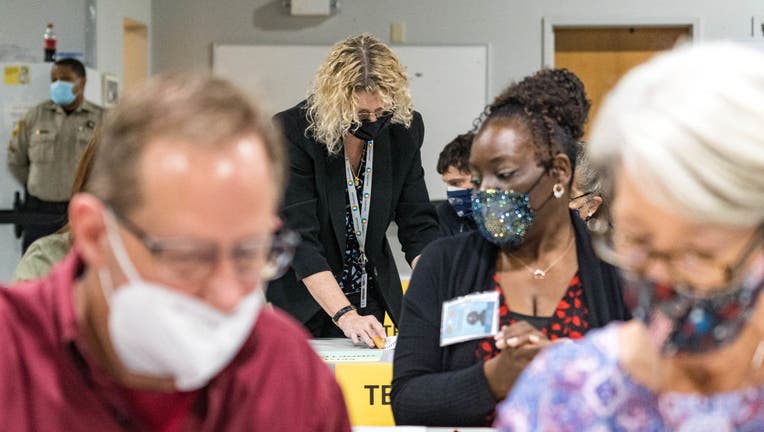 Gwinnett county workers begin their recount of the ballots on November 13, 2020 in Lawrenceville, Georgia.

PAULDING COUNTY, Ga. - Georgia officials tell Fox News they are investigating a Florida attorney for attempting to vote illegally in the state's Jan. 5 Senate runoff, after a video emerged of him stating his intent to move to Georgia temporarily and encouraging others to use his relative’s address to do the same.

In a speech on Nov. 7 to the Bay County Florida Republican Party, Florida attorney Bill Price announced he was “moving” to Georgia to vote for Republican Senate candidates in order to help Republicans keep the Senate majority.

“If we lose the Senate on Jan. 5 in Georgia, we will become Venezuela,” he told the crowd inside the county headquarters in a video posted to their Facebook page, “and I will invite each and every one of you to be my roommate in Georgia.”

Moving to Georgia temporarily only to vote is a crime in the state, according to Georgia’s office of Secretary of State.

“Registering without the intention of permanent residency is a felony,” the office said in a statement to Fox News from spokesman Walter Jones. “Only permanent residents are eligible to vote in Georgia.”

“Secretary Raffensperger has made it clear he has no tolerance for election wrongdoing and will investigate any credible evidence of it,” the statement said.

“It’s only for a couple months,” Price is heard saying on the video as he encourages the crowd to join him. “We’ll have buses leaving right out here, going to Atlanta the day before Jan. 5 and I might need you guys to help me move back to Florida on Jan. 6.”

Price is heard encouraging attendees to use the address of his brother who lives in Georgia in order to register to vote there.

“We have to start fighting back and we have to do whatever it takes,” he says in the footage. “And if that means changing your address for the next two months, so be it.”

“We’ll make room for you at the dinner table,” he said before stating his brother’s address several times.

“An attorney should know better,” said Deidre Holden, chair of the Board of Elections in Paulding County, where Price attempted to register to vote. “This is fraud,” she said, “especially after his speech on Facebook.”

“I’m a Republican,” she said, “but I just think it’s wrong when someone tries to vote illegally and then tell other people to do it."

Price did not answer messages left with his office in Panama City, Fla.

Get updates on this story from FOXnews.com