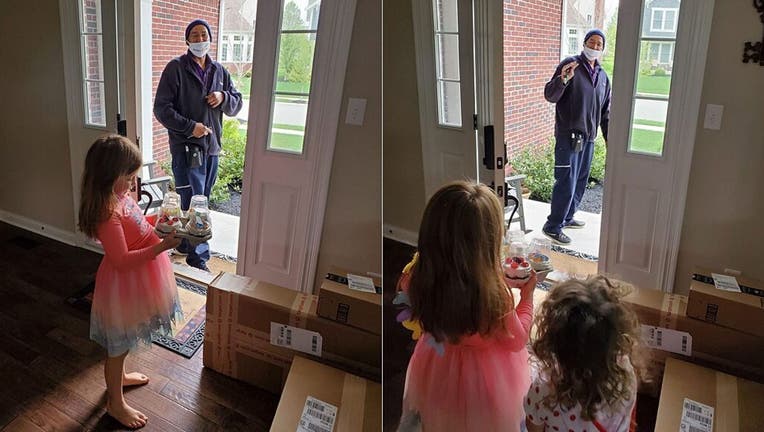 Jodan Price left a little something special when he spontaneously dropped off cupcakes for Emma Paternoster's sixth birthday during the coronavirus crisis. (Liz Paternoster)

A kindhearted FedEx driver in Indiana left a little something special when he spontaneously dropped off cupcakes for a little girl’s sixth birthday, after bringing a package to the family’s home and realizing that the coronavirus crisis likely dampened the youngster’s celebrations.

Jodan Price of Fishers was praised as “the best FedEx delivery man in the world” by grateful mom Liz Paternoster after impulsively dropping off the sweet treat for her young daughter’s birthday last month, though he had never met the family.

“OK FedEx our driver deserves a bonus! He realized it was our daughter's birthday and went to Dairy Queen to get her ice cream cupcakes,” the parent tweeted on April 30, in a post that has since received over 211,000 likes and 33,000 shares. “He said ‘I just wanted to do this because if we weren't in this situation, she'd be celebrating with friends.’”

In a video clip that has since been viewed over 721,000 times, the birthday girl opened the front door and gasped in excitement to see Price on the doorstep, with cupcakes in hand.

“You can share a treat with everyone,” he said, handing them off.

Serendipitously, Paternoster was recording Emma’s trip to the front door, because she thought that FedEx was delivering a pre-ordered birthday gift, Yahoo reports. Price had previously dropped off a package for Emma’s dad, and got inspired to leave the birthday treat after realizing a youngster in the household was celebrating a birthday.

“I knew she wasn’t in school because of the pandemic so I wanted to make this a special day,” explained Price, a father of two adult sons and 36-year veteran of FedEx.

Through the magic of social media, Price’s son Austin soon caught wind of the post, confirming his father’s identity behind the good deed.

“This is my dad!” Austin tweeted on May 4, in a post that has been liked over one million times. Commenters applauded the thoughtful gesture, describing the man as a “role model” and “generous soul.”

Days later, Price returned Paternoster’s home to formally meet the family. The second time around, he was in store for a surprise of his own – as the door was decorated with signs that said “Thank you Mr. Price” and “You’re our hero!”

“I was just gonna tell you, thank you for sending that. I always tell my sons “always be nice and do for others,’” Price said at the front door, in a now-viral clip that Paternoster shared on May 5.

“Here's the thing – there’s been 80,000 people who wanted me to say ‘thank you’ to you! I’m gonna start crying,” she exclaimed. “We are so appreciative to have you in our neighborhood.”

Price said of the good deed: “No problem, no problem. Like I said, I know it was her birthday and I know she'd be with her friends but I just wanted to stop for a second."