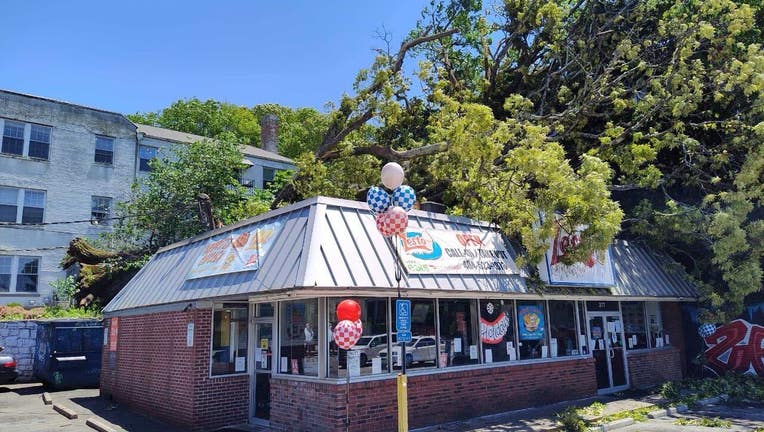 ATLANTA - A famous Atlanta fast-food restaurant that's been a staple for more than 70 years is closing — at least for the near future.

Zesto's Little Five Points location was severely damaged when a tree fell on top of the roof on Friday.

"As hard as the past year has been, it took a giant tree to fall in L5P and knock us out of business," a post on the restaurant's Facebook page said.

Zesto vice president Lee Ann Livaditis said the tree fell Friday early afternoon while she and her husband were out of town for their son's college graduation. She said no one was injured in the incident.

"We went by last night to see the damage and everything looked frozen in time ... nothing but the tree had been cleaned up yet," Lee Ann Livaditis told FOX 5 Atlanta.

The Little Five Points outpost opened in 1967, according to the restaurant's website.

She said the tree hit the back of the store hard. While they don't know the extent of the repairs yet, she said there is a lot of work ahead to determine the future of this location.

Livaditis said they are asking our customers to visit other nearby locations at Moreland and United Avenue, Piedmont Road and 151 Forest Parkway, where some Five Points employees were transplanted.

"We have been there since 1963 and have generations of loyal customers that we hope will come visit us elsewhere in the meantime," Livaditis said "We are very touched by the supportive feedback we're getting from people near and far. We'd also like to thank our staff for handling everything so well during what was already a hectic day. Never a dull moment with Zesto even after 72 years in Atlanta."

Zesto has made it to celebrity status by appearing in a handful of movies including "Baby Driver," "The Fundementals of Caring," "How High 2" and "Good Girls."

The Five Points location got a "close up," so to speak in the FX show "Atlanta," starring Stone Mountain native Donald Glover.

The Zesto Drive-In is known for its vintage-inspired atmosphere, selling everything from ice cream to hot dogs to the "Chubby Decker" burger.