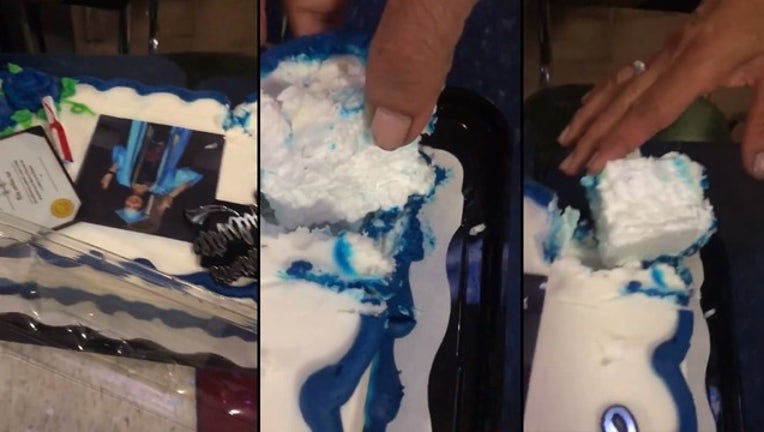 PASADENA, Texas (FOX 35 ORLANDO) - A family in Texas is disappointed after they cut into a graduation cake and found that it was made out of sytrofoam.

Marsy Flores went to a Walmart in Pasadena to order a cake for her daughter's graduation. She ordered a two-tier cake with her daughter's picture on it. A pick-up date was scheduled for a week later. However, when she returned to pick up the cake, she was informed that her order did not exist.

With no more two-tier cakes available, a manager informed Marsy to pick any of the cakes that were ready for purchase. Nellie Flores, Marsy's sister, told Fox 35 that she selected the only blue cake remaining, as it matched her daughter's school's colors.

After the graduation ceremony, Marsy and her family went to a restaurant to eat dinner. After finishing their meals, Marsy went to cut into the cake with a butter knife. However, the knife did not get through the cake at all. So, Nellie told Fox 35 that their dad then took a shot at the cake with a pocket knife. He quickly discovered that the cake was made out of styrofoam.

After processing the situation, Marsy and her family decided to go to Walmart. "They need to see this," Nellie said. However, upon returning the cake, Walmart only offered a $60 gift card in return.

"The moment was gone," Nellie said in disappointed. She expressed to Fox 35 that she wanted her sister and neice to have a special moment together to celebrate the graduation.

Days later, Marsy spoke with Walmart again over the phone. They again offered a gift card but also offered to provide the family with a new two-tier layer cake. However, Nellie reiterated to Fox 35 that the moment was still gone.

She also expressed that that she just wants "people to know what happened" and for Walmart to "make sure this never happens to anyone else again."

Nellie went on to post video of the cake onto Facebook explaining the situation. In her caption, she said that Walmart "can't make up for the embarrassment and humiliation she went through with family and school friends there."