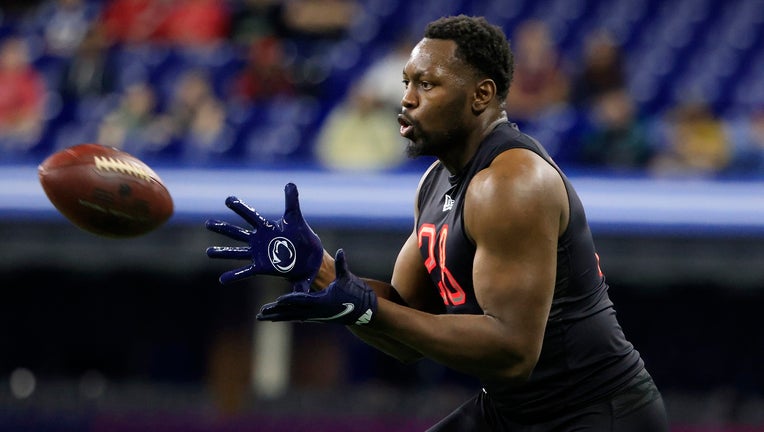 Arnold Ebiketie #DL28 of the Penn State Nittany Lions runs a drill during the NFL Combine at Lucas Oil Stadium on March 05, 2022 in Indianapolis, Indiana. (Photo by Justin Casterline/Getty Images)

FLOWERY BRANCH, Ga. - The Atlanta Falcons traded up in the second round of the NFL draft to address one of their biggest needs by selecting Penn State edge rusher Arnold Ebiketie on Friday night.

Placing a priority on boosting their pass rush, the Falcons acquired the No. 38 overall pick from the New York Giants. The Giants obtained the No. 43 selection in the second round and a fourth-round pick, No. 114 overall.

Atlanta still has another second-round selection, No. 58 overall, and two third-round picks on Friday night.

After trading away their fourth-round pick, the Falcons will have three selections on Saturday, including two in the sixth round.

London (6-4, 219) said his uses his size, strength and background in basketball to overcome his lack of breakaway speed. He said his top time in the 40-yard dash was 4.5 seconds.

London didn't run in his workout for NFL scouts leading up to the draft because he was still recovering from a fractured right ankle which ended his 2021 season after eight games.

In his visit to the Falcons facility on Friday, London posed with his new No. 5 jersey and was asked about his perceived lack of separation speed.

"At the end of the day you could say I'm covered," London said, using his fingers for air quotes. "That's really not the case. I'll go over the top of somebody and at the same time if you go watch tape I've definitely blown by a couple people. That's all I've got to say about that."

London said he was a fan of two big receivers, Tampa Bay's Mike Evans and Detroit Lions Hall of Famer Calvin Johnson. He said he believes Johnson was "the best receiver who ever played" and "would just manhandle you at the end of the day. That's what I think I'm trying to emulate and trying to get to."