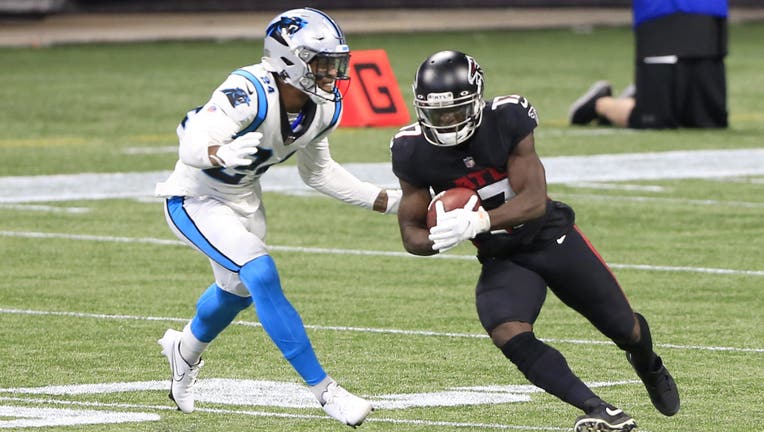 ATLANTA - Teddy Bridgewater threw for 313 yards and two touchdowns, Juston Burris made a huge interception in the end zone and the Carolina Panthers held on for a 23-16 victory over the winless Atlanta Falcons on Sunday, perhaps finishing off the coaching career of Atlanta’s Dan Quinn.

The Falcons dropped to 0-5 for the first time since 1997, turning up the heat even more on their embattled coach.

Carolina (3-2) built a 20-7 halftime lead behind Bridgewater’s touchdown passes of 57 yards to D.J. Moore and 3 yards to Mike Davis, drawing boos that could be heard even from a sparse, socially distanced crowd of 6,656 at 75,000-seat Mercedes-Benz Stadium.

Atlanta, which this season became the first team in NFL history to squander fourth-quarter leads of at least 15 points in consecutive games, tried to turn the script in the second half. Younghoe Koo booted two field goals and the Falcons drove into position for a tying score in the fourth quarter.

But, on third-and-4 from the Panthers 5, Matt Ryan badly underthrew a pass to Russell Gage in the back of the end zone, allowing Burris to make the interception with 8:49 remaining.

With the Falcons clearly deflated, Carolina drove nearly the length of the field — taking 7:39 off the clock — to set up Joey Slye’s third field goal of the game, a 22-yarder with 1:10 remaining.

Atlanta settled for Koo’s third field goal, a 54-yarder with 4 seconds remaining, in hopes of recovering an onside kick and getting one last shot at a tying Hail Mary. But Robby Anderson fell on the high hopper to finish off the Falcons.

The Panthers won their third straight and snapped a five-game losing streak to their NFC South rival, beating Atlanta for only the second time in their last 10 meetings.

Bridgewater was 27 of 37 in the eighth 300-yard passing game of his career. Davis was a huge weapon, rushing for 89 yards and hauling in nine catches for another 60 yards.

The Falcons did plenty of damage on the ground, rushing for 166 yards with a 6.6-yard average. Todd Gurley led the way with 121 yards on 14 carries, including a 35-yard TD that gave Atlanta an early 7-0 lead.

This was the first game in which the Falcons allowed fans, though it was an extremely limited turnout that left plenty of room to spread out in the retractable-roof stadium.

Panthers: DE Brian Burns was knocked out of the game with a concussion after diving into a pile of tacklers late in the first half. Burns remained face down on the turf for several minutes before getting up slowly and wobbling to the sideline. ... Carolina also lost two other defensive starters when CB Donte Jackson went out in the first quarter with a toe injury and tackle Kawann Short was ruled out late in the game with a shoulder injury. ... DE Yetur Gross-Matos (ankle) also left the game. ... OG Chris Reed was evaluated for a possible concussion in the second quarter and cleared to return.

Falcons: CB Kendal Sheffield, who missed the first three games of the season with a foot injury, left the field in the final minute of the first half with an injured right ankle. Sheffield was hurt while defending a pass along the sideline to Anderson. The Carolina receiver went up to make a 22-yard catch, while Sheffield crumpled to the turf holding his foot. ... Injury plagued DE Takk McKinley sustained a groin injury in the first quarter and did not return. ... Jones couldn’t go because of a lingering hamstring injury that has kept him off the field for all but one half in the last three games.

Falcons: Travel to Minneapolis to face the Minnesota Vikings.