What is the metaverse?

Facebook CEO Mark Zuckerberg and many others believe the future of the internet is something known as "the metaverse."

Facebook Inc. is now called Meta Platforms Inc., or Meta for short, to reflect what CEO Mark Zuckerberg said Thursday is its commitment to developing the new surround-yourself technology known as the " metaverse." But the social network itself will still be called Facebook.

Also unchanged, at least for now, are its chief executive and senior leadership, its corporate structure and the crisis that has enveloped the company.

Skeptics immediately accused the company of trying to change the subject from the Facebook Papers, the trove of leaked documents that have plunged it into the biggest crisis since it was founded in Zuckerberg's Harvard dorm room 17 years ago. The documents portray Facebook as putting profits ahead of ridding its platform of hate, political strife and misinformation around the world.

The move reminded marketing consultant Laura Ries of when energy company BP rebranded itself to "Beyond Petroleum" to escape criticism that the oil giant harmed the environment.

"Facebook is the world’s social media platform, and they are being accused of creating something that is harmful to people and society," she said. "They can’t walk away from the social network with a new corporate name and talk of a future metaverse."

Facebook the app is not changing its name. Nor are Instagram, WhatsApp and Messenger. The company’s corporate structure also won’t change. But on Dec. 1, its stock will start trading under a new ticker symbol, MVRS.

The metaverse is sort of the internet brought to life, or at least rendered in 3D. Zuckerberg has described it as a "virtual environment" you can go inside of, instead of just looking at on a screen. People can meet, work and play, using virtual reality headsets, augmented reality glasses, smartphone apps or other devices. 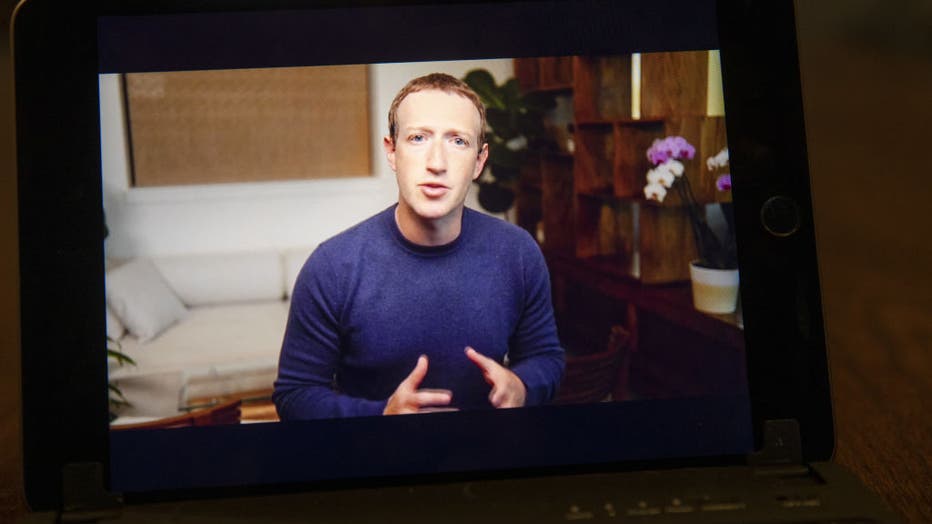 It also will incorporate other aspects of online life such as shopping and social media, according to Victoria Petrock, an analyst who follows emerging technologies.

Zuckerberg’s foray into virtual reality has drawn some comparisons to fellow tech billionaires’ outer space adventures and jokes that perhaps it's understandable he would want to escape his current reality amid calls for his resignation and increasing scrutiny of the company.

On Monday, Zuckerberg announced a new segment for Facebook that will begin reporting its financial results separately from the company’s Family of Apps segment starting in the final quarter of this year. The entity, Reality Labs, will reduce Facebook’s overall operating profit by about $10 billion this year, the company said.

Other tech companies such as Microsoft, chipmaker Nvidia and Fortnite maker Epic Games have all been outlining their own visions of how the metaverse will work.

Zuckerberg said that he expects the metaverse to reach a billion people within the next decade and that he hopes the new technology will creates millions of jobs for creators.

The announcement comes amid heightened legislative and regulatory scrutiny of Facebook in many parts of the world because of the Facebook Papers. A corporate rebranding isn't likely to solve the myriad problems revealed by the internal documents or quiet the alarms that critics have been raising for years about the harm the company's products are causing to society.

Zuckerberg, for his part, has largely dismissed the furor triggered by the Facebook Papers as unfair.

In an interesting twist, the Chan Zuckerberg Initiative, the philanthropic organization run by Zuckerberg and his wife, Priscilla Chan, bought a Canadian scientific literature analysis company called Meta in 2017.

By Thursday afternoon, though, its website Meta.org announced that it will "sunset" at the end of March. The Meta.com domain, meanwhile, redirected to the former Facebook's rebranded corporate site.

At headquarters in Menlo Park, California, the iconic thumbs up sign that has long been outside was repainted to a blue, pretzel-shape logo resembling an infinity symbol.

Some of Facebook’s biggest critics seemed unimpressed by the name change. The Real Facebook Oversight Board, a watchdog group focused on the company, announced that it will keep its name.

"Changing their name doesn’t change reality: Facebook is destroying our democracy and is the world’s leading peddler of disinformation and hate," the group said in a statement. "Their meaningless name change should not distract from the investigation, regulation and real, independent oversight needed to hold Facebook accountable."

In explaining the rebrand, Zuckerberg said the name Facebook no longer encompasses everything the company does. In addition to the social network, that now includes Instagram, Messenger, its Quest VR headset, its Horizon VR platform and more.

"Today we are seen as a social media company," Zuckerberg said. "But in our DNA we are a company that builds technology to connect people."